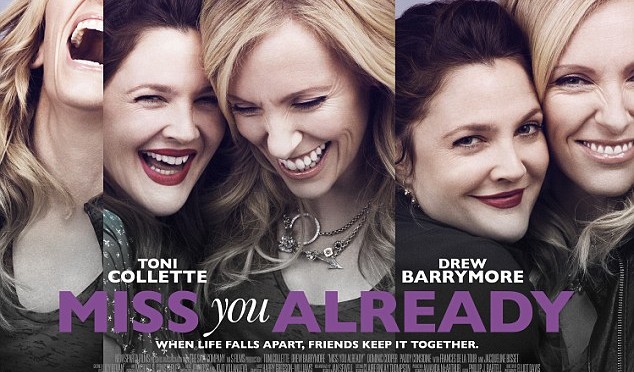 A chick flick no swinging dick should flick, MISS YOU ALREADY is a bosom buddy movie in the most profound way.

Very honest and very bloody funny, it’s the story of an enduring friendship between Milly and Jess, who became great mates at school after Jess migrated to London from America as a pre-pubescent.

Milly is a PR guru with a rock star husband, Kit, and two lively children, while Jess is an environmentalist who lives on a barge with oil rig worker husband, Jago, desperately trying to conceive.

In many ways, the girls are opposites, Milly a wild child still, marriage and motherhood not totally taming her, while Jess was always the more conservative, both muse and acolyte to the rumbustious Milly.

Life is good, but not fair at all, when Millie is diagnosed with breast cancer. A self avowed vixen, vain in the main, she agrees to undergo chemo in an endeavour to save her life. In the midst of death, there is life, as Jess finally becomes pregnant, joy amongst the sorrow, the double helix of life itself, the DNA of our emotional life.

There’s a palpable chemistry between the two leads that makes MISS YOU ALREADY a cut above the buddy movie slash disease of the week formula. And that chemistry boils over into the relationships with their screen spouses, Dominic Cooper as Kit and Paddy Considine as Jago.

And there’s chemistry of another kind between the two girls and Milly’s mother, Miranda, an actress, played with delicious growing old disgracefully relish by Jacqueline Bisset.

One of Miranda’s contacts in the movie business is Jill, a makeup and hair specialist at Pinewood Studios played with joyous empathy by Frances de La Tour, who she employs to make the best fit of a wig when chemo robs her of her own luxuriant mane. It’s an extraordinarily powerful and poignant scene, beautifully rendered.

Director Catherine Hardwicke comes out from under her Twilight tweenie success with a mega mature movie of dealing with life and death situations. Hardwicke turns 60 this month and is perhaps coming to terms with her own maturity. Before she became a director, Hardwicke was a production designer and the look of MISS YOU ALREADY is stunning, from the London locations, the trip to the Yorkshire Moors,- the girls are mad Wuthering Heights fans and feature in a bucket list trip that unearths its own Heathcliff,- the clothes, and the extraordinary residences of each of the girls.

MISS YOU ALREADY is a film about procedure – medical ones to be specific, but also the wider way we proceed through life, the procedure of family, friends, independence and interdependence, of coping with those bloody slings and arrows, and the outrageous fortune of enduring love.