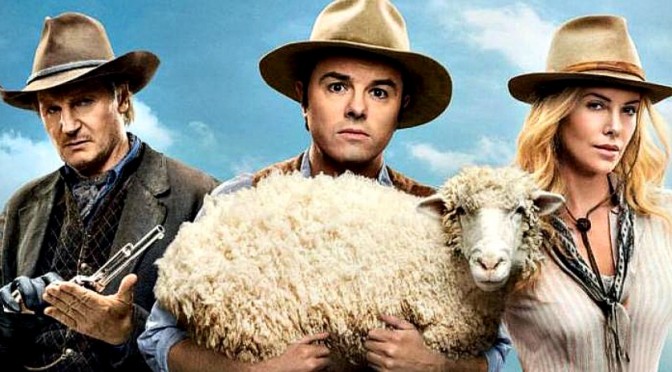 A MILLION WAYS TO DIE IN THE WEST is so lame it decided to self immolate at the Sydney preview screening, liberating viewers from a cinema experience that made a couple of hours in the dentist’s chair look preferable.

As jejune and juvenile as a jumentous joke, A MILLION WAYS TO DIE IN THE WEST is a fatuous, feeble and unfunny attempt at emulating Blazing Saddles complete with flatulence farce that fizzles instead of reports, whittling it down to scatological cess-pool humour. The evacuation of a character’s bowels into a bowler hat is a highlight.

Allusions to Blazing Saddles, There’s Something About Mary and Back to the Future only pinpoint this picture’s poverty of originality, puerility, and laboured jocularity. It has all the initiative of an echo.

If TED was the brainchild of writer/director/star, Seth MacFarlane, then A MILLION WAYS TO DIE IN THE WEST is his brain aneurysm, his pot-shots at political correctness falling foul of his aim and ricocheting offensively off the mark.

TED was crude and yet had an indelible charm. ONE MILLON WAYS TO DIE IN THE WEST is utterly charmless. All sheep shit and dung dag.

Charlize Theron is the only saving grace of this movie, the only actor giving a performance rather than mugging and he only performer with a sense of comedy timing. She is poised, graceful and elegant, which only emphasises the crude ugliness of the rest of the production.

And speaking of crude ugliness, the Event Cinemas George Street, Cinema 4 where this film was screened is filthy, dilapidated and acoustically akin to an echo chamber. The chairs are a disgrace, reminding one of Travis Bickle’s description of his cab’s seat in Taxi Driver.

There’s A MILLION WAYS TO DIE IN THE WEST but why waste time and space on each and every one of them. This lowest common denominator will no doubt dominate an undiscerning box office, making it a million ways to succeed at the cinema. And add to the million ways of decline in the west.