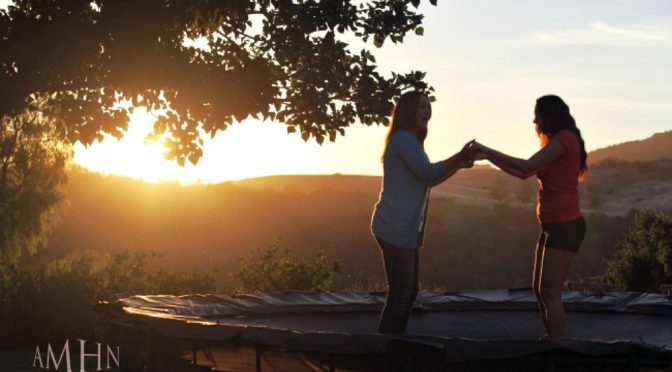 It’s often said that the opening credits of a film tell the story.  A MILLION HAPPY NOWS begins with a short journey through a glare filled  garden of jagged branches into an indistinct  washed out, white walled home through a room in chaos to a terrible fear associated with the precipice-like drop from a balcony.

The traveller under the credit roll is Eva Morales (Jessica Leccia) but she is not the only voyager of the film.  Her partner is Lainey Allen (Crystal Chappell), a woman of a certain age, a Soap Opera TV star, the winner of an Emmy and a woman with secrets.  Not just the ten year love story between she and Eva but her secret fear that there is a looming health crisis.  The bright lights and sudden flashes of the ever-present cameras worry her, lines are not “sticking” and names and recent events seem to be lost.  Lainey suddenly quits a 20 year career and moves with Eva to the isolation of a house above a beach and a small town.

Playing as part of Queer Screen’s Mardi Gras Film Festival, this film is a labour of love and it’s there in every frame and every word.  Written by Marisa Calin, actress and writer… she is the author of the respected YA novel BETWEEN YOU AND ME… it is a story close to home.  Calin’s grandmother suffers from Alzheimer’s and she created the production company Perfect Pictures in 2014 to ensure the story was told.

Her co-producer and star, Crystal Chappell is actually a very well-known Daytime Drama star.  Winner of three Emmys, she appeared for 25 years on soaps like: Days of Our Lives and The Bold and the Beautiful.  But her interest to the Lesbian Community peaked when she starred with Leccia on the soap opera Guiding Light.  They became known as “Otalia” by legions of lesbian fans for their on screen chemistry.  They were then reunited for the hit lesbian web series VENICE.

From the first time we see Lainey and Eva together there is an obvious history of loving and sharing.  In public, Lainey is outgoing and used to the approach of strangers while Eva is watchful, wary and protective.  In private, Lainey can be emotionally unavailable with the occasional diva turn but Eva is her port in the storm.  However, the tempest of their lives becomes fierce as the film and the illness progresses.

Issues faced by sufferers and their carers are exacerbated by Lainey’s fame and by the complexities which same sex couples face when one of them is mortally ill.  Conversations without pronouns, legal papers and a new kind of ‘coming out’ are in the text, yet, like the trampoline in the yard of their clifftop home, the film is never still.  There is light and shade.  It’s funny and sad, intelligent and emotional.

And wonderfully brought to life by Chappell and Leccia.  Their rapport is palpable, their energies vibrate in sync and they look beautiful together.  There are no sex scenes here but they sizzle when they are on screen together.  It helps that they are lovingly directed by Albert Alarr (a veteran director of Soaps) and brilliantly shot by Kevin Perry (Venice the Series).

We see them most often in close-up and the depth of their work as genuine, honest emotion carries the rich story is a delight to watch.  Every frame has complexity and power.  Late in the film, there is a locked off 3 shot where there is a small movement in the lower part of the screen and it is character filled and electrifying.

It may be clear where the story is travelling to, the journey may be inescapable but the film is not depressive or overtly manipulative.  There are strings and flutes and foregrounded cello on the soundtrack but there is also Phebe Starr’s ‘Alone With You’ gently supporting the visual sequence which evidences Lainey’s cognitive decline.  And it’s awfully sad as we feel the loss.  But it does one good to have a bit of a blubber in the dark of a cinema and A MILLION HAPPY NOWS is a film to stay with you long after you emerge into the outside glare.

A MILLION HAPPY NOWS will play