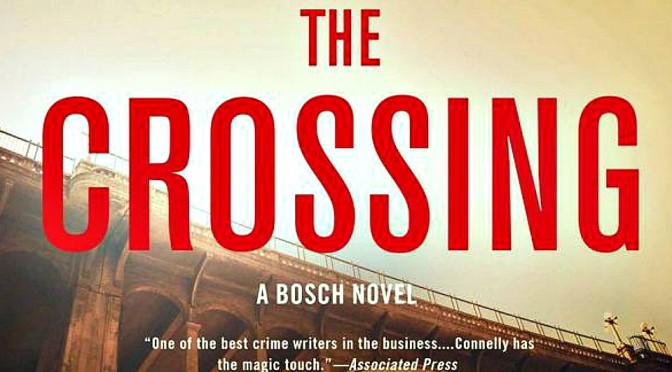 Cosy as a cardigan, Michael Connelly’s THE CROSSING is a police procedural that features Harry Bosch. Bosch is retired from the LAPD but is suing his former employer for wrongful dismissal. His lawyer is Mickey Haller, who happens to be his half brother.

Haller is also defending an ex gang member for the rape and murder of a Los Angeles Sheriff’s deputy’s wife, a defendant whom Haller believes to be innocent.

When Haller’s regular investigator, Cisco, is run off the road and incapacitated, he implores his half brother to take up the case. Bosch perceives such a posting would be crossing to the dark side, and initially wants no part of it. But the fact that the real perpetrator might still be at large sways his initial response and he agrees to at least look into it.

Seasoned investigator that he is, Bosch’s relentless attention to detail uncovers a thread of evidence that had been attached to the proverbial needle in a haystack and starts unstitching a tapestry of blackmail murder and police corruption.

THE CROSSING is a neat reversal on THE REVERSAL, the Connelly novel that had Mickey Haller swapping his defence lawyer’s cap to try a case for the Los Angeles District Attorney. It’s a nifty plot device that creates an immediate conflict and tension not only between characters but internally, as principles are prey to pragmatism and ingrained beliefs are challenged.

The plot of THE CROSSING is compulsively propelling but it is the story of Bosch that prevails overall.

Connelly’s creation has endured twenty novels, not including a couple of cameos in other Haller adventures, and his back story and present domestic situation as sole parent to a teenage daughter gives Bosch a texture that transcends stock character crime fighters.

Characters from previous exploits embroider the story and two new additions – Ellis and Long – bring added frisson. This gruesome twosome is a chilling creation, symbiotic parasites that would please Quentin, the Cohens, or Carl Hiaasen.

As usual, Connelly’s sense of place is another value added component, as Bosch criss-crosses Los Angeles and environs – he has a brief trip to Las Vegas -in his pursuit of the truth.

Twenty books on, the temptation to tread water might be given in to by some writers, but Connelly is adept at keeping Bosh swimming and not merely afloat. Now that he has made the crossing from homicide detective to defence counsel investigator, we may expect more partnering with Mickey Haller. Or maybe not. Maybe THE CROSSING is the last of Bosch. Maybe not.

Connelly still remains full of surprises, a master of suspense, and though THE CROSSING doesn’t finish on the pugnacious promise of a follow on as did the previous novel, The Burning Room, there is a reignition from the past that may pay dramatic dividends.

THE CROSSING by Michael Connelly is published by Allen & Unwin