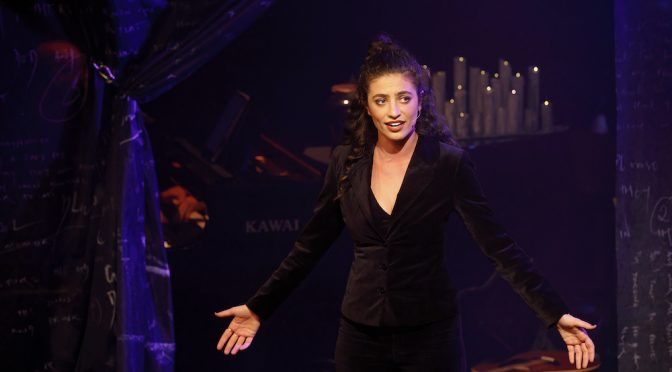 I know that that there have been musicals about the strangest choice of subjects. Psycho The Musical, , Bonnie and Clyde The Musical. The list goes on. Still to create a cabaret about funerals and grief. Isn’t this another level?!

Mia’s show felt like she was just throwing everything she thought of at the subject in an anarchic kind of style.  From this chaotic mix she then shapes a sort of conventional ending.

From the start she is a bit of a provocateur with an impish quality. Dressed in tight fitting black, she asks the audience do you think I’m sexy? What do you think of my tits? At another point she talks about bum waxing. I was wondering if there was. some sort of Bette Middler thing going on.

I was looking for how she was going to frame the show. At one point she had us thinking that she was the host, and we were the members of the funeral reception/gathering after the cremation, but then Mia ditches that idea and just moves on with her freewheeling style.

I thought that it was just a little too cute when she is thinking out loud, referring to this woman called Elizabeth who wrote about death and the dying a lot, and she can’t think of her surname. It was just a little unconvincing. We all knew  who she was thinking about!

Then Mia has a bit of fun, inviting the audience into an old game of, who from history would you like to have dinner with? Mia tells us that the first two people she would invite would be the Queen of death Kubler-Ross and the King of tragedy Aeschylus.

The staging of the show was excellent. The stage was kind of divided into two. A terrific small band of musos were at the back of the stage. Then there was a black scrim across the stage with, in tiny writing, select existential quotations.

Musically, I enjoyed the show. The songs were all Mia originals, she has a good, clear and strong voice, and her band were terrific. I particularly liked the song where the chorus says- if this is the cost of love, I am ok to pay it.

It is a bit ironic but my favourite part of the show was when Mia totally loses it, and rages across the stage, saying fuck Kubler-Ross, fuck this and that. She felt very real then. Also there was a touching scene when she talked about a friend who had recently passed away, and how whenever they met he would always start their meeting saying, ‘welcome to the end’.

Summing up, As  a performer Mia Morrissey is very talented. In regards to her show.  I have a bit of a love/hate relationship to it. At times crass and tasteless. At other times gutsy and powerful. A real mixed bag.