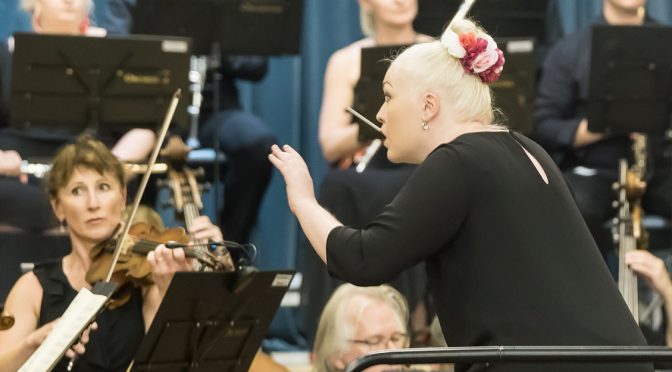 ‘New Beginnings’ was TMO’s final Met Concert in this year’s series, and the  last performance for 2017. It communicated with signature energy and freshness across a diverse programme. The concert began with a world premiere then forged an expressive path back through time, covering a guitar concerto before finishing with Beethoven’s mighty Symphony No 3 {‘Eroica’).

The evening  started with the excitement of a world premiere work for orchestra,  Heather Shannon’s Theme and Variation. Shannon utilised a synthesizer and sequencer to develop the pitch ingredients and melodic material prior to scoring this work’s theme for orchestra. Shannon then wrote an extended, character-filled variation to span the movements.

The resulting tapestry created was demonstrated to be excellently suited to the analogue resources of an orchestra following its electronic origins. In this premiere it was also very suitably realised via the flexible interpretative sensitivities of TMO.

This work was an engaging event for the audience to escape into initially. It contained beautifully manipulated atmospheres, was unmistakably recent ‘new music’ but remained accessible. TMO made the most of moments containing Shannon’s uniquely fresh humour.

Met Concert #5’s concerto or soloist collaboration featured guitarist Giuseppe Zangari. We were given a pre-Christmas gift of hearing live the Concerto de Aranjuez by Joaquín Rodrigo. The eloquence of Zangari’s playing and his command of the required guitar textures and effects enhanced our enjoyment of this modern classic. His finely phrased cantabile lines were a highlight of the well-known Adagio second movement.

This guitar virtuoso’s excellent control and extensive arsenal of nuance immediately created a precious intimacy. Such delicacy was matched and subsequently expanded upon with tastefully stepped organic growth by TMO, under the masterful expressive approach of conductor Sarah-Grace Williams.

More delicate moments and well-structured phrases unfolded in Zangari’s encore – the loved Cavatina by Stanley Myers as used in the 1978 film ‘The Deer Hunter’.  This was a mesmerising moment of solo guitar music. The exquisite placement and pace of the familiar music before us confirmed  this guitarist to be a treasured exponent of the instrument currently teaching and performing in this country.

The first half of this concert programme was well balanced, with the piece of new music and concerto work complementing each other formidably. The crowning glory of this to  evening came with the inclusion of Beethoven’s ‘Eroica’  Symphony.

This work was a stunning vehicle with which to highlight the level of performance currently reached by TMO.  This finale to Met Concert #5 and to TMO’s diverse offering for 2017 also proved that an audience loves a concert to include at least one highly familiar,  classic work.

Williams’ interpretation of this symphony maintained all the groundbreaking drama and inimitable Beethoven emphasis throughout the structure.  In the very bright acoustic at this venue, there were many moments supplying the composer’s trademark grunt and movement towards climaxes.

The familiar opening movement rocketed along at a well chosen tempo, with fluid exchange between instrumental families. The sprawling Marcia funebre second movement emanated from the orchestra with admirable consistency of mood and a sensibly contained stillness.

Each movement reached its close with a precise and  effective air of completion prior to the next part of the narrative beginning.  Praise must go to TMO winds, and in particular the oboe for refined playing and effective creation of the subtle intricacies of Beethoven’s agenda.

Following the fiery final movement, TMO received quite an ecstatic standing ovation. This was thoroughly deserved for the calibre of entertainment provided not only  during this concert but right throughout  2017.

TMO’s 2018 season has been launched. It features more world premiere performances, exciting collaborations with soloists and the pleasing inclusion of music for voice and orchestra, Details of subscriptions can be found at: www.metorchestra.com.au