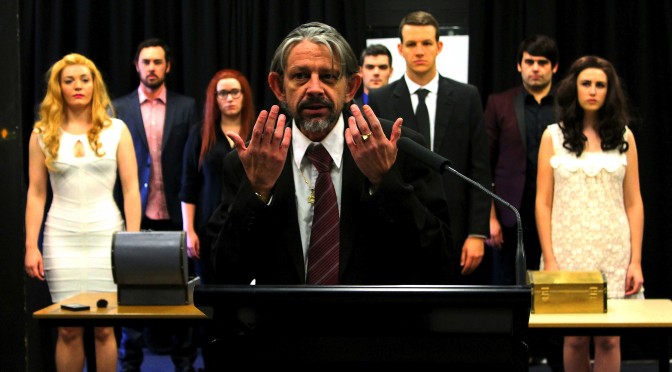 The first recorded performance of The Merchant of Venice was 10th February 1605. The themes of racial and religious hatred, money, marriage and mercy all still reverberate as soundly today as they did in 1605.

The context has undoubtedly changed; the 17th century fission between Christianity and Judaism resonates far less today, but the cold war between two powerful men of money is as fresh and smelly as it has ever been.

STOOGED THEATRE has presented a production that breathes new life into this classic text. With a few theatrical tweaks and contemporary references, THE MERCHANT OF VENICE becomes a media savvy play about money and politics and taking down your political opponents using the law as your weapon. Random pen drops on a newspaper will supply any number of current examples to support that theme.

In this production the young and handsome shipping merchant Antonio and banking CEO Shylock are rival mayoral candidates for an upcoming election. Their antipathy has been further fueled by public insults and financial competition, mainly by Antonio. The opening series of stop motion tableaux very effectively and efficiently establishes the context and character relationships.

The other clever tweak is the reality TV show “Portia – 3 Caskets, One Winner.” Portia’s father’s inheritance bequest has been turned into a reality show whereby contestants, upon submitting the 3,000 ducats entry fee, vie to win the wealthy heiress Portia’s hand in marriage by choosing correctly from one of 3 caskets. Again, random pen drops on the TV guide will provide titles of reality shows where the quest for love ensues good TV ratings.

The tension between the political rivals is intensified when Bassanio begs a loan of his friend Antonio in order to pay the entry fee to Portia’s show. Antonio’s money is tied up in his fleet so he instructs Bassanio to borrow and he will go guarantor on a loan from Shylock. Seemingly whimsically, Shylock asks for a bond of a pound of Antonio’s flesh should he forfeit on the loan. Antonio feels confident that his ships will all return before 90 days is up, but when they all appear to founder, he finds that he is at the merciless Shylock’s mercy.

The clutch of core male characters; Tim O’Donnell as Bassanio, Glen Waterhouse as Antonio, Matt Graham, Scott Eveleigh and Luke Standen as Antonio’s good friends, Gratiano, Salanio and Lorenzo, could have been lifted from any TV studio floor and bring absolute urban cool to this modern interpretation. They are the “A-listers” for any society event.

Tim Blundell is the quintessential Shylock. His slight frame scaffolds a flapping, black suit and his dark, harried features and mellifluous voice convey a complex mixture of emotions and desires that elicits a sympathy and understanding of Shylock, despite his murderous intentions. He is not merely a villain. He is also the loving and wronged father of the quietly wilful and deceitful runaway, Jessica, played with controlled nuance by Gabriella Stevens, and the ex-employer of the defecting speech writer, Launcelot.

The sub plot of Lorenzo, Jessica and Launcelot has also been cleverly manipulated and given a delightful love triangle directorial licence twist at the end. Theo Rule as Launcelot brings far more depth of emotion to what was traditionally the clown role and he totally engages our attention and sympathies. We want him to win.
Another quick but effective “grab” at the end of the show suggests that there will be further scandal and problems for Antonio – the setting up for a potential sequel.

There are some contemporary caricatures and archetypes that bring moments of raucous humour and fun to this production. Scott Eveleigh doubles up to play the Prince of Morocco, a suitor for Portia. In this production the Prince has been turned into a rapper, P. Rocco and his attempt at choosing the right casket becomes a rap performance, complete with back up and choreographed rap moves. Luke Standon doubles as another suitor, Aragon, a top selling magazine man of the year who is an arrogant airhead with a blonde wig and faux European accent. We are so glad they come on the show, but also that they don’t win.

The cast was rounded out by 3 other very skilled, focused and capable young men, Joel Yager, Joshua Yager and Joseph Issa, presenting support characters such as game show host, stage managers, reporters and the judge.

Never underestimate the benefit of a good soundtrack in theatre. Film has merchandised this concept, as does of course, the musical. Christopher Harley’s soundtrack was perfect for setting the contemporary tone and atmosphere and if there had been a CD or download available I would have purchased one.

The sold out opening night performance at the Civic Playhouse is testimony to the reputation that STOOGED THEATRE has developed over the past 11 years. Whether they are presenting cutting edge contemporary plays or giving a contemporary cutting edge to classic texts, we have all come to expect a quality show. This production of The Merchant of Venice lives up to and further supports this reputation.

THE MERCHANT OF VENICE is playing at the Civic Theatre Playhouse, Newcastle until this Saturday evening, 7th June.

For more about The Merchant of Venice, visit http://premier.ticketek.com.au/shows/show.aspx?sh=MERCHANT14

One thought on “THE MERCHANT OF VENICE”