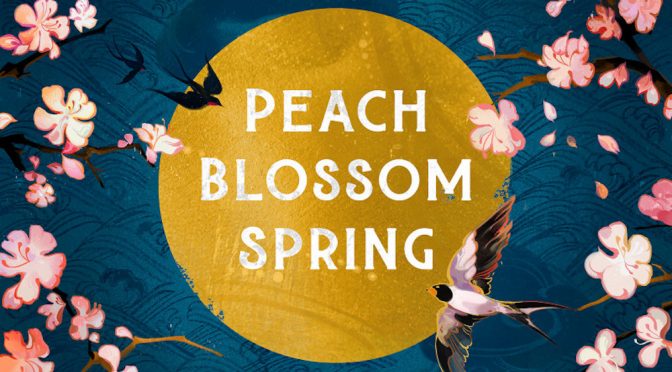 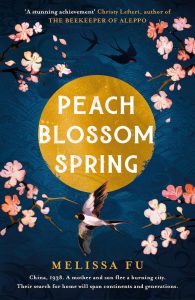 Roaming across assorted continents and three generations, the reader gets swept along in this epic tale of love, regret , loss of family , language , culture and country , the horrors of war , migration ,a quest for identity – and yet also is there the possibility of hope ? Also, power and politics are crucial. This book is compelling and arresting .

It is divided into thirty one chapters and an epilogue, with an ‘origins’ to begin. It scans the history of China from 1938 and takes the reader through to Taiwan and America in 2005. There is the symbolism of the scroll, stories based on the painting executed on the scroll, and peach trees . The book’s title is drawn from one of the classic fifth century tales depicted in the scroll, which Meilin treasures. It is, at times, very moving and harrowing.

The book shifts between the three main voices of Meilin, Renshu and his daughter, Lily . We see how the various characters throughout the book deal with racism and cope with family squabbles.

We begin in 1938, and meet Meilin and her four year old son Renshu who have to flee their burning city as the Japanese approach . Mielin’s husband , Renshu’s father Xiaowen, has been killed in action .They start a massive journey across China. The one item Meilin ensures she takes with them is a beautifully delineated hand compelling scroll, and at times she unrolls it and tells Renshu various stories based on the illustrations.

The allegorical fables provide comfort and enlightenment as they toil across China exploring for a place of refuge. Meilin is depicted as a strong heroine , astute and enterprising , savvy enough to pick up danger signals and good at establishing friendships.

PEACH BLOSSOM SPRING observes her continuing relationship with Longwei, her brother in law, which becomes progressively entangled and multi layered. Renshu studies hard , gets a scholarship to an American university and morphs into Henry Dao, marries and American ( Rachel) and becomes father to Lily. While at trained and resident for most of his life in America, Henry’s work and family life is a bit shaky. He suffers from the childhood upheavals he experienced and is constantly aware that he and Meilin are in danger, possibly under Communist surveillance.

We also see how Rachel feels, stuck in a town without opportunities for her. Their daughter Lily wants to comprehend her family history, but how can she when Henry refuses to talk about his past and insists she only speaks English, forbidding her to attend Chinese language classes? How can Henry keep his family safe when hidden politics might affect them? How can Lily discover who she is if she doesn’t know half of her family’s history? Meanwhile, Henry and Meilin’s relationship becomes fragmented by politics and distance.

There is also the symbolism of the peach tree planted in Henry’s garden in America as Meilin requests. It is linked in to one of the main stories depicted on the scroll. For many years the tree is treated badly, and Henry chops it down. But as a symbol of hope and fulfilment , Henry discovers seedlings one day in his garden and he and his wife Rachel tenderly cultivate the new tree , mulch , manure , water it and it grows , giving Henry possible comfort and fulfilment .

This is a debut novel. More please!!