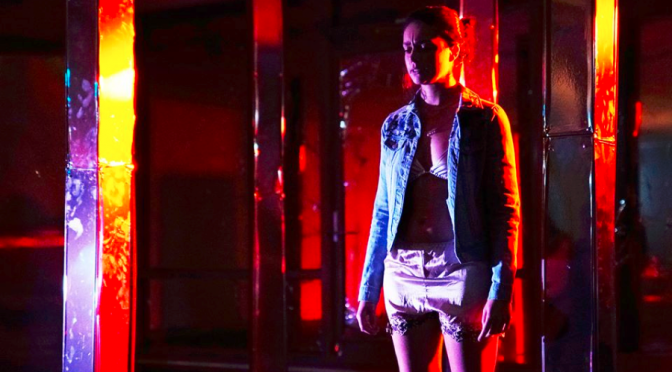 It’s true. I do sometimes overthink stuff. Particularly about performance and theatre and the purpose and the possibilities and the methods and the …. you know. But since the death of Sir Peter Hall I have been craving words. Just words. Linguistic simplicity chosen with care and expressed without accessories. Not necessarily full ‘white room’ but close. Nor anything grandiose or intellectual but minimal, relevant, characterful dialogue that draws or, preferably, pulls in an audience.

I’ve come close, especially during the Sydney Fringe. Minimalism is how the Fringe rolls after all but tonight I found it. RIPE, presented by Mediochre Productions,  has scratched and soothed that itchy intellectual desire. And it took me by surprise, neatly hidden away in an abandoned office up on a third floor overlooking roadworks at the Fringe Festival Hub.

RIPE is a burst of skyrocket with a roman candle of a script, sparkler direction and cracker performances.

It’s New Year’s Eve in Sydney, you see. Claire meets Elisabeth and an instant bond is formed. Neither knows why. Their night will be a blur of new experiences for a recently left school/home/family, Claire. There’s a clearly inappropriate relationship with an older man troubling Claire and a clearly dangerous relationship with a local thug on Elisabeth’s mind. Add in a certain amount of dope and booze and eclectic characters and a stoned kitten and a blooded, bag-a-bones greyhound and the fireworks in the sky are just backdrop.

RIPE is a new script by Nicole Plüss. Plüss is a Sydney based writer who has had several children’s and YA novels published and who has written for film and radio as well as theatre. RIPE is an elegantly narrative short version of a long night. The script completely nails that delicate balance between character and plot.

It begins in the first person singular past tense as Claire begins to speak to us about what happened that night. As their friendship progresses Claire and Elisabeth share the burden of storytelling and of bringing the other characters to life … but always through Claire’s eyes. As they grow closer too, memory becomes confused and Elisabeth corrects and prods the remembering.

Raechyl French is Elisabeth and Reilly O’Byrne-Inglis is Claire and it is an exciting aesthetic and creative pairing. A fact well understood by director Ellen Wiltshire whose strong eye for images often gently and subtly arranges them in classic pose … one just behind the other or side by side as they describe the action.

They are moved superbly through the inherently murky, forested city of the set, by Elia Bosshart, and on the occasions when they travel away from each other there is a clever manipulation of the emotional investment the audience has made in their being together. Wiltshire has a deft feel for the comedy also and balances it so well with the tension. We are sitting watching and seeing trouble coming and are in fear for Claire and how it will affect Lizzie.

The rapport and genuineness of their relationship is stellar. French and O’Byrne-Inglis are terrific in these roles, charismatic and open… and funny as hell.

French’s Lizzie has a free spirit undiminished by the obvious world weariness of her choices. She has a delicious smirk at the goings on in which she involves her companion. But her care is real despite a humanity informed by some seriously uninformed ethical understandings. She’s unstoppable.

O’Byrne-Inglis’ Claire is naïve and drawn to the parts unknown of her companion and her city. It is such a well moderated performance, especially as events and substances and a unique co-conspirator bring a young woman ripe for adventure on a jumping jack of a journey. Claire grows as we watch and O’Byrne-Inglis’ openness and ability to imply the desire for risk in her creation is exactly right. It engages our empathy from the off.

Our fears for Claire in the finale of the piece finally allow us to understand why the two have been drawn together. This is female friendship writ with joy. Yet towards the end of the play, once burning bright now falling blackened from the sky, there is a sadness that the women or their forged bond might not survive. Pathos envelopes them and there is loss for what reality might destroy as memory clears.

With regard to technical aspects, currently the play is good Fringe fare. The show is off to Melbourne next. It’s flexible, can be bare, can be lights on and off but is given robustness and grounding by the audio, by  Elina Goodwin. Well sourced effects, well placed and not intrusive. And the undercurrent soundscapes to complement the memoryscape as the play builds to a climax were particularly emotive.

Funny and emotional, RIPE has made me feel better. Sated … fat and happy and ready to re-join the mainstream and I really look forward to more productions from Mediochre which is a female centric company only newly assembled. I am worried, though, about what will happen to my theatre going when Peter Brook dies though. He’s 92! That itch will be a quest to scratch.

RIPE is playing as part of Sydney Fringe until September 23rd.