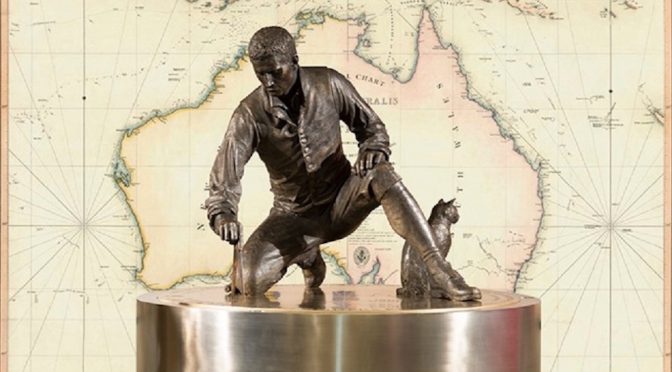 This is a relatively medium sized book in volume, divided into five parts with an introduction .There are fourteen chapters in the first four sections , the last section consisting of ‘occasional pieces’ .An index , notes and bibliography are included as are some illustrations.

The author Gillian Dooley is Honorary Senior Research Fellow at Flinders University. She is the co-editor of Matthew Flinders’ Private Journal (2005), of the 2019 Wakefield Press anthology The First Wave: Exploring Early Coastal Contact History in Australia (with Danielle Clode), and (with Philippa Sandall) of Trim: The Cartographer’s Cat (2019), a new authoritative edition of Flinders’ Biographical Tribute. She also writes on authors including Jane Austen and Iris Murdoch.

In her most intriguing book, Dooley draws on numerous sources to portray the many aspects of Matthew Flinders’ life, (1774 – 1814) and personality .Flinders was born at the end of the Age of Enlightenment and grew up as Romanticism became established , in some ways combining both these movements .His enforced extended stay in captivity on Mauritius (1803-1810) because of world politics is dealt with in great detail . Between 1791 and 1803 Flinders participated in major voyages of exploration, most notably the expedition with George Bass that verified Van Diemen’s Land (now Tasmania ) was definitely an island .

Flinders also led the first inshore circumnavigation of mainland Australia and is credited as being the first person to utilise the name Australia for our country. He has an island and a university named after him and several statues erected in his honour both here in Australia and the UK. Flinders is revealed as being tenacious, courageous, resourceful and intelligent yet also proud , stubborn and conservative in some ways . We learn he was musical (he played the flute) and an aurilophile (The cat Trim!) He survived shipwrecks and captivity.

Dooley utilizes Flinders’ private journal (as well as the official Captain’s log ,letters, maps etc ) to present  him not just as an ambitious explorer but a romantic scientist , researcher , omnivorous reader ( his favourite book was Robinson Crusoe by Daniel Defoe ) , a writer , researcher , a son , a brother , a father ( he had a daughter , Anne) , a loving husband to Ann his wife and a friend. (We learn of his friendship with Sir Joseph Banks , who was in many ways his patron , and Flinders used his library when back in London ) and also with Madame d’Arifat , the brothers Pitot and Charles Baudin on Mauritius and others. Dooley introduces us to Flinders’ parents, Matthew senior and mother Susannah, his step-mother and assorted siblings. His relationship with his wife Ann and daughter Anne is detailed and how they coped with the long separation. We also learn of the sad fate of his friend George Bass, and the affect on Bass’ wife Elizabeth .

We read of his thoughts about slavery (he had no qualms) and also in particular how he viewed the various interactions between the First Peoples both in Australia and elsewhere ( his views were typical of the era) and while how he loved the island of Timor he was a bit snobbish about the native inhabitants. Also, he had no hesitation in punishing his crew if necessary.

The final section of the book consists of Occasional Pieces Dooley has presented about Flinders, an address on the bicentenary of Flinders’ death in 2014 and assorted book reviews.The epilogue examines his legacy as a Romantic scientist , a hero and how he has been portrayed in poetry and fiction.

A most discerning analysis of the life of a navigator and explorer who has become almost a national legend.