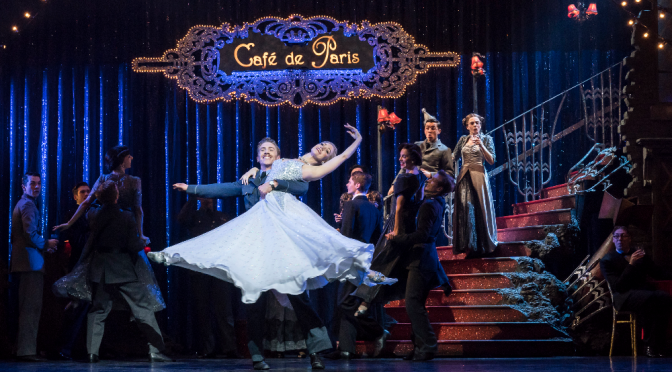 Filmed late last year at Sadlers Wells in London Matthew Bourne’s New Adventures brings a magnificent, spectacular revival of CINDERELLA to the screen. It transfers marvellously from stage to cinema.

Created in 1997, Bourne has transposed the fairy tale to Blitz – torn 1940’s London, with the prince becoming a dashing but traumatised RAF pilot, a wickedly evil stepmother, horrid step sisters, a creepy rest of the family and a guardian angel instead of a fairy godmother. (The angel has a motorbike instead of a transformed pumpkin for transport to the ball).Those of us familiar with his works will pick up choreographic references to Bourne’s Swan Lake, The Car Man, Nutcracker, Sleeping Beauty , Lord of the Flies etc.

Bourne’s choreography is very demanding, sometimes MacMillan like with seemingly almost impossible lifts in some of the pas de deux. There is also allusions to Macmillan’s Manon in the Café de Paris scene in the way Cinderella is passed around the male ensemble and also if you look closely hints of the much loved Ashton version of Cinderella are scattered throughout the work. There are also references to Powell and Pressburger‘s 1946 film A Matter of Life and Death.

Prokofiev’s restless , pulsating and sumptuous score is interspersed with newsreels and the sounds of air raid sirens , planes , doodlebugs etc .

Lex Brotherston has devised spectacular, stylised sets that not only evoke a city in grave danger, with scenes set in Underground stations, torn, bomb damaged buildings, dangerous dangling bits of masonry, angled fireplaces, barrage balloons, but also a wonderful coup de theatre when the Angel rewinds time and sets right the bombed , glittering, opulent Café de Paris . And some of his costumes (especially for the stepmother) are ravishing – not forgetting Cinderella’s beautiful ball dress and some glamorous uniforms among other things.

As quiet, tormented, bespectacled Cinderella, Ashley Shaw is marvellous. Poor timid Cinderella is trapped by the cruel, capricious whims of her horrible step family ,who treat her like a drudge. She does however have a gentle ,loving relationship with her father. When we first see her she is dressed in grey – skirt ,blouse and cardigan. The scene where she dances dreamily with the tailor’s dummy, which becomes a demanding pas de deux for her and Harry the pilot, who dances semi – robotically like a mannequin in this sequence , evokes reminisces of Ashton’s version with the broomstick. Her transformation is magnificent.There is a gently teasing running gag about her glasses; Cinderella  keeps taking them off to look better, but then Harry doesn’t recognise her.

Andrew Monaghan as Harry the traumatised, injured pilot is dashingly handsome and chivalrous and dances with magnificent flair.

Michela Meazza has a delicious time hogging the limelight as the stepmother, elegantly arrogant and malevolent, a blend perhaps of Joan Crawford and Bette Davis.

The stepsisters (Stephanie Billers , Nicole Kabera ) are beautiful on the outside but ghastly underneath . One of the step brothers has a creepy foot fetish and is drawn to Cinderella’s special silver slippers. But there is also a rather touching subplot where one of the other step brothers who is gay finds love.

Alan Vincent as the wheelchair bound father, a WW1 veteran, gives a poignant performance and he has a touching pas de deux with Cinderella, the only one now who really cares about him – mostly he is ignored and pushed to one side by the step family, who reluctantly include him in enforced gaiety.

Liam Mower as The Angel, here the equivalent to the fairy godmother,who eventually leads Cinderella and her pilot to happiness ,is platinum blonde in a shiny white satin suit. He is at times possibly rather cold and aloof taking control where necessary and perhaps a trifle menacing but appearances are deceptive. Mower is a superb dancer and his opening introductory solo (with arms like wings) is marvellous. He is also in disguise as the doctor in the hospital scenes.

There is a tense wartime feeling of racing against the clock, of grabbing happiness while you can .A dynamic , thrilling and enthralling spectacular reworking of the familiar fairytale.