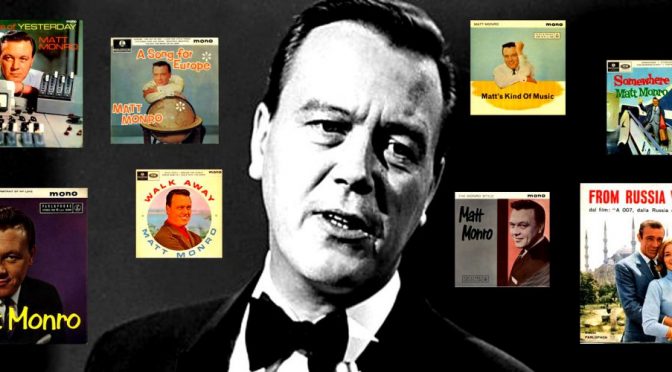 He was born on December 1, 1930 as Terence Edward Parsons and, in an attempt to reach some kind of recognition for his singing talent, assumed names like Terry Fitzgerald,  Al Jordan, Fred Flange (Fred Flange?…more on that later) and finally, as we know him, Matt Monro.

Matt was re-named by no less an entertainer than Winifred Atwell – remember her from Black and White Rag, the theme song for the TV programme Pot Black?  Matt came from Matt White, the first Australian journalist to write about Matt and Monro from Atwell father’s first name.

Monro came to Atwell’s attention when she heard a recording he had made in Glasgow with some musician friends .  The song Polka Dots and Moonbeams impressed Atwell so much that she helped Monro win a recording contract with Decca.  Monro was still very much a lorry-driver then and carried on in that trade even after Decca recorded his first album Blue and Sentimental in 1956.  The recording led to him signing with the BBC Show Band.  By then he was driving a bus in London, which he told reporters at the time, he would continue to do.  But that didn’t last long.

However, he found himself principally singing in soap commercials from Pink Camay to Listerine.  Enter George Martin, The Beatles’ and Peter Sellars’ manager. At the time Martin was working on a Peter Sellars album called Songs for Swinging Sellars that was meant to satirise Frank Sinatra.  Sellars was looking for a singer whose voice sounded like Sinatra so that Sellars could then mimic that style.  Monro was chosen and given the name Fred Flange (remember him?). But Sellars soon realised that Monro’s voice was much too good to muck about with and left the track, You Keep me Swingin’, as recorded with no spoofs or gimmickry.

Martin realised Monro’s potential and signed him to EMI’s subsidiary label, Parlophone.  Love Walked In was followed by Portrait of my Love, which went to number 3 on the charts.  1961 saw the first trans-Atlantic hit with My Kind of Girl.

Monro’s fame started gaining momentum.  In 1962 he had a hit with Softly as I Leave You and this was followed in 1963 with From Russia With Love, the James Bond film, where his vocals were initially heard playing from a transistor radio but later played in full over the final credits.  He represented the UK in the 1964 Eurovision Song Contest where he finished second with I Love the Little Things.  Interestingly he liked the Austrian entry, Warum nur Warum, so much that he had it ‘translated’ into Walk Away which also became a hit single.

Not bad for a boy who was born in Shoreditch, North London and had it so hard as a youngster that he joined the army when aged 17 and a half.  His dad had died when he was three and his mother had a mental breakdown soon after. Monro was taken to a foster home but he was so unhappy, the rebel in him took over and he was moved from school to school, plus he was evacuated to the countryside when war with Germany was declared.  He left school at 14, and some say he could neither read nor write properly. After he joined the army he was posted to Hong Kong as a tank driving instructor. His record in the army wasn’t the best either. He couldn’t adjust to the military discipline but the saving grace was his voice which brought him to the attention of the local radio station.  He won the weekly .talent show almost every week and, in exasperation, the station gave him his own show.

After he was de-mobbed he returned to England in 1953 but found it hard to find a job and eventually settled for being a lorry driver and later a London Transport bus-driver.  He became known as ‘the singing bus-driver.’

Very much later when his fame had spread, Sinatra called him ‘the easiest, most perfect baritone in the world’.  His repertoire included mostly songs that were fresh and new and not copies of songs by the old masters like Cole Porter, George Gershwin or Johnny Mercer.  His hit recordings of Gonna Build a Mountain and Softly as I Leave You and Yesterday (the Paul McCartney song) were all composed by local contemporary artists.

When Nat King Cole died in 1965, Capitol Records conscripted Monro to fill the void.  They brought him to the United States but the collaboration wasn’t all that fruitful because it only produced one hit – the John Barry/Don Black collaboration of Born Free which in time became Monro’s signature song.

Monro appeared in cabarets and nightclubs and casinos in the U.S. and made the occasional guest appearance on The Tonight Show, Ed Sullivan, Merv Griffin and Dick Cavett’s Shows.

For some reason he was a great hit in the Philippines.  Even Sinatra couldn’t top him. Monro’s version of My Way sold eight million copies there whereas Sinatra’s version only sold 300,000!  Maybe it was because the Philippinos loved slow ballady-type songs,

“When I performed there,” Monro recalled, “I began with uptempo numbers.  They looked at me as though I was mad. Thankfully, with the fourth song I just sang the first word ‘Yesterday’….and the place erupted.”  He played the Coliseum for one night with a capacity crowd of 27,000. Subsequently he was retained to perform for an extra six nights.

After recording his last U.S. album Close to You in 1970, he returned to England.  In 1973 he released his last hit single And You Smiled and his album Heartbreakers released in 1980 soon turned to gold.

Monro continued jetting around the world performing at nightclubs and appearing on television.  But the travelling soon took its toll. Feeling very homesick he started drinking heavily to suppress his loneliness.  He was drinking, conservatively, at least half a bottle of scotch per day. He was already a heavy smoker and in 1984, while performing in Australia he started having stomach pains.  Returning to England he was diagnosed with liver cancer and placed on the waiting list for a liver transplant. But the cancer had spread too far.

In his lifetime he had never achieved a UK number 1. In 2005, his daughter Michele discovered a film of her father that had been hidden in their garage for 40 years.  The footage was transferred to a DVD and released as An Evening With Matt Monro and it rocketed to the top of the DVD charts.

Shame he wasn’t there to reap the rewards.