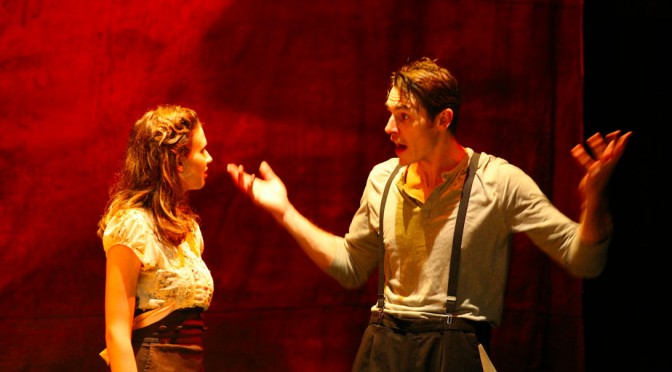 THE MATILDA WALTZ begins in Sydney in 1894, where we meet siblings Vera and Ida Templeton, their lawyer Mr. Andrew (Banjo) Paterson and the charming rogue, Horrie. We follow the Templeton family tree, through the First World War and the Second World War and onto the Vietnam War. We visit France, New York, Sydney, Queensland and outback NSW with clever locations changes, made with the change of a street sign.

it was a pleasure to hear Banjo’s immortal words, his poetry with its bush verses city themes, weaving an intriguing path as the stories unfolded. It was particularly poignant as this year is the 150th anniversary of Banjo’s birth.

The beautifully red coloured backdrop of the Australian outback is highlighted by the very clever ending that integrated perfectly Russell Drysdale’s part in the play.

The music matched and complimented the changing times in Australia’s history, and the various lighting states are used effectively to shift the action from one part of the stage to another.

This was an ensemble piece, with most of the eight actors – Danny Bolt, Michela Carattini, Maria Hemphill, Tiffany Hoy, Leof Kingsford-Smith, Jaymie Knight, Jessica Leafe, and Simon Lee – playing a variety of often quite different roles, all bring their characters to life and take the audience through the developing Australian identity and changing historical landscape.

All the actors are very strong about revealing their characters and their situations, and they differentiate their various roles clearly, but particularly noteworthy was the role as Ida (Maria Hemphil), the true stalwart “Woman of the West” who later appears as Alice (Banjo Paterson’s grieving wife).

Deborah Mulhall expertly directed her play, and this ensures that we clearly understand where we are in each individual story, with fast transitions from one story to the next.

This production sits well and proudly in this centenary year of the Gallipoli landing, and the establishment of an Australian identity both at home and abroad.

Recommended, THE MATILDA WALTZ opened on  Friday 10th April and concludes with a special Anzac Day performance on Saturday 25th April at Star of the Sea Theatre at Stella Maris College, corner of Iluka and Collingwood Streets, Manly.

The show is playing Fridays and Saturdays at 7.30pm,  and Sundays at 3pm.