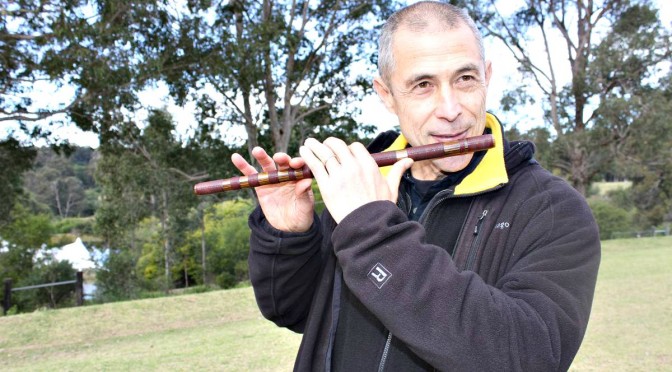 Mosman Art Gallery hosted a rare jewel of a concert– Sydney was privileged to hear revered shakuhachi master Riley Lee in a solo performance as part of the Sacred Music Festival.

The shakuhachi is a Japanese end blown flute, traditionally made of bamboo. This instrument was introduced into Japan from China in the 8th century.

Lee began playing the shakuhachi in Japan in 1971. In 1980 he became the first non Japanese to attain the rank of ‘ dai shihan’ ( Grand Master).  Even further back, in 1974, he was also the first non- Japanese to play wadaiko ( the Japanese drums ) professionally as a founding member of the group now known as Kodo.

Lee was born in Texas and grew up in Hawaii , moving to Australia in 1986 with his family. Among other things he also holds a Phd in ethnomusicology and is a scribe for scholarly magazines.

He has released numerous CDs and his stage performances include Graeme Murphy’s Air and Other Invisible Forces for the Sydney Dance Company , Chi Udaka with the Lingalayam Dance Company as well as performances with groups TaikOz and Synergy.

In all the concert featured some ten short pieces for shakuhachi. Perched on a stool, Lee, glowing and semi-feline with a delightful smile, looked like a young Zen master, and was dressed in severe black.

Lee introduced each piece and at times was warm and humorous, at other times almost in a trance like state whilst playing. He had four different shakuhachi of various size and colour which he used for the various works as appropriate. The sounds ranged from bell and bird like to a sound similar to a ship’s foghorn.

First we heard Passing with its trance-like, birdlike, ripples and echoes. Pounding Waves followed- you could hear the pounding sea flowing on the beach, the darting fish and seagulls.

Empty Sky which came next alludes to the ‘absolute’ which cannot in fact be defined by our rational minds. It was strong, yet delicate and at times there was perhaps a martial arts influence as well as a sharp , Kabuki like atmosphere .The long sustained notes had a breathier sound than in other pieces.

Cranes rising, which seeks to portray the mixed emotions of both the parent birds and the young one when it leaves the nest and tries to fly, evokes the birdcall squabbles.

The piece, in fact , was partly fractured, almost electronic in sound at points and featured a quite harsh sound.

Offering and Safe Delivery were presented together, alluding to the wheel of life, a new baby and the successful completion of an artistic endeavour. These pieces were sadder, slower and more reflective in nature.

After interval, Cascading Waterfall, is  amongst one of the oldest works in the shakuhachi repertoire. In the middle range for the instrument, one can hear the shimmering curtain of rain, alluding to the tradition amongst many Buddhist sects, of meditating under waterfalls. There was a soft, bell like, introspective opening to Mountain Valley, one of the longest pieces played. One could feel the mountain mist slowly forming.

This was in sharp contrast to the Lion of Azuma, with its soaring, breathy notes and high birdlike trills. One could hear the drowsy lion’s tail twitch. For this piece a short piccolo like shakuhachi was used.

The concert’s final piece, entitled Exile, was haunting and wistful, and featured  dizzying whirls and repetitions and long sustained notes. There were notes filled with longing and sadness, and the piece concluded gently.

A respectful silence greeted the concert’s end, and then much enthusiastic applause.