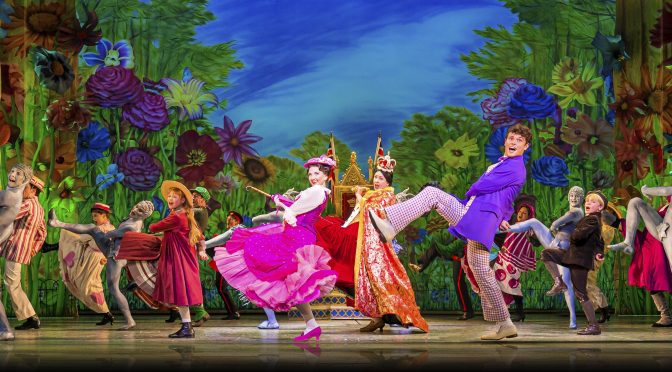 Cameron Mackintosh and Disney are getting excited as their latest production MARY POPPINS is opening at the Sydney Lyric Theatre on 15 May 2022.

Performed by an exceptionally talented company of Australian performers, MARY POPPINS is led by the practically perfect  Stefanie Jones in the title role. Joining her is triple-threat Jack Chambers (Singin’ In The Rain, Burn The Floor, Hairspray) as  Bert and Australian musical theatre icon Nancye Hayes AM (Guys and Dolls, My Fair Lady, Grey Gardens) as Bird Woman.

Speaking about the casting, co-creator Cameron Mackintosh shared “This joyful, beloved musical featuring the world’s  favourite nanny, created by Australian Pamela Travers, demonstrates the importance of family like no other, especially in  these parlous times. To create a piece of spectacular theatre like Mary Poppins you need a supercalifragilistically magic cast  – and after a two-year search, we have found one. Absolutely Spit Spot! Mary will be flying high when we open in Sydney this  May.”

The story of the beloved English Nanny was created by PL Travers in 1926, with her adventures on Cherry Tree Lane unfolding  over eight books. With many of her characters inspired by people from her childhood, the Australian author was born in  Maryborough, Queensland before moving to Bowral in New South Wales at a young age. Mary Poppins will fly into Sydney in  May, ready to inspire a whole new generation with this truly magical adaptation.

The original music and lyrics by Richard M. Sherman and Robert B. Sherman include the classic songs Jolly Holiday, Step in  Time, Feed the Birds and Supercalifragilisticexpialidocious. New songs and additional music are by the Olivier award-winning  British team of George Stiles and Anthony Drewe. Book is by Academy Award®-winning screenwriter and Downton Abbey creator Julian Fellowes, and this production is co-created by Cameron Mackintosh. The producer for Disney Theatrical  Productions is Thomas Schumacher.

This brand-new production of MARY POPPINS is produced in Australia by Cameron Mackintosh, The Walt Disney Company  Australia and New Zealand, and the Michael Cassel Group.

The Australian premiere of MARY POPPINS is supported by the NSW Government through its tourism and major events  agency Destination NSW.

Tickets are currently available for performances to 17 July 2022.

For more ticketing information including a schedule of performances visit