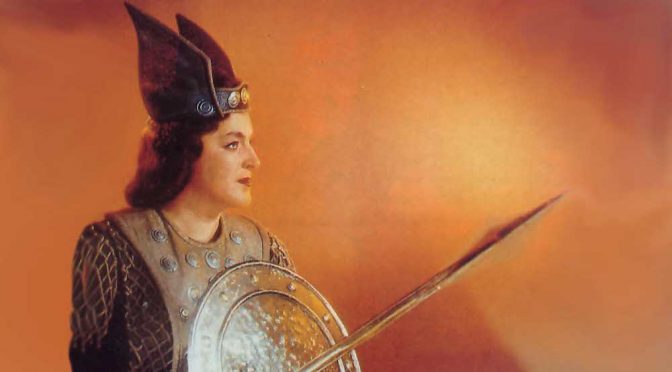 Märta Birgit Nilsson (17 May 1918 – 25 December 2005) was a celebrated Swedish dramatic soprano. Although she sang a wide repertory of operatic and vocal works, Nilsson was best known for her performances in the operas of Richard Wagner and Richard Strauss. Her voice was noted for its overwhelming force, bountiful reserves of power, and the gleaming brilliance and clarity in the upper register.

Nilsson, whose 100th birthday anniversary we celebrated two years ago, had a wicked sense of humour.  Her humour extended in particular to Sir Rudolf Bing, the then Metropolitan Opera director, conductor Herbert von Karajan and to some extent fellow artist and tenor, Franco Corelli plus the odd barb towards our very own Joan Sutherland with whom she once had a disagreement. Once, when asked if she thought Sutherland’s bouffant hair-style was real, Nilsson answered “I don’t know. I haven’t pulled it yet!”

Her verbal battles with Bing are legendary.  When asked if he thought Nilsson was difficult, Bing, likening her to a jukebox, replied: “Not really, she opens her mouth.  I pour enough money in it and out comes this glorious voice!”  In retaliation when Nilsson was preparing her tax form she was asked if she had any dependents and answered: “Yes, just one.  Rudolf Bing!”

There was also some comradely rivalry between Nilsson and Franco Corelli.  They both tried to outdo each other by holding their top C as long as possible in Act II of Turandot.  In a fit of pique, after Nilsson held her note a fraction longer, Corelli stormed off and ranted to Bing that he couldn’t continue the performance.  Bing, who was used to Corelli’s tantrums, advised the tenor to bite Nilsson’s ear when Calaf next kissed Turandot in Act III.  Corelli didn’t but he mentioned it to Nilsson, whereupon Nilsson, as soon as practicable, cabled Bing that she’d had to cancel the next two performances because she was suffering from rabies!

On another occasion, when Nilsson outlasted Corelli in the high note stakes Corelli took his revenge at the end of his aria “Nessun Dorma”.  When Turandot sang “La mia Gloria e finita” (My glory is over), Calaf was supposed to respond with “No! Essa incomincia!” (No! Your glory begins!).  Instead Corelli sang “Si! Essa finisce!”…Yes! Your glory is over!

Once, when asked what her favourite roles were, Nilsson answered “Isolde made me famous but Turandot made me rich”.  She sang Isolde 33 times and Turandot 52.  One of her famous recordings was her singing Brunnhilde in the pioneer LP recording with Decca of Wagner’s Ring Cycle.  The project took from 1958 to 1965.

Finally, when Nilsson’s cord holding the string of pearls around her neck snapped and fell on the floor Herbert von Karajan commented: “Expensive pearls bought with your Metropolitan fees?” “No!” snapped Nilsson. “Imitation, bought from your Vienna fees!”