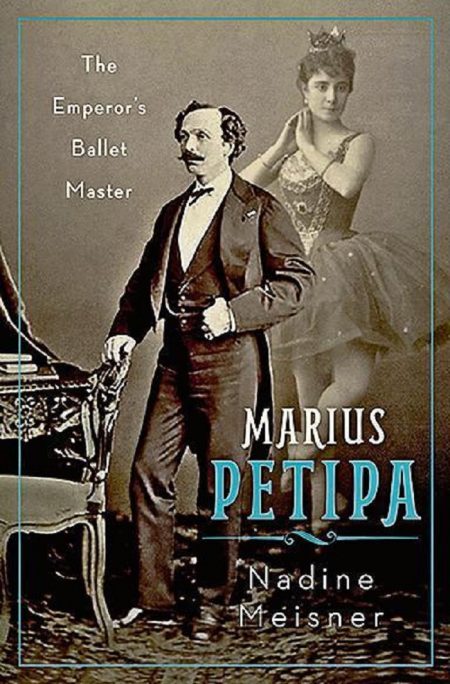 Of medium size, but quite thick and heavy to read and carry , Nadine Meisner’s book also includes fascinating illustrations – photos of the time and costume designs – and a terrific index at the back as well as many pages of footnotes and an extensive bibliography. Fabulous for balletomanes.

This is the first biography in English of Marius Petipa, (1818- 1910) a legendary Titan of ballet history . Marius Petipa: The Emperor’s Ballet Master examines his life and work in great detail, also placing it in the context of turbulent history. Previous works in English mention Petipa but are mostly translations of memoirs or texts in which he is not the primary focus .Meisner draws on libretti and other archival material, like theatre records, memoirs,  contemporary reviews, and photographs, enabling us to at least partially reconstruct and elaborate on works that have been presumed lost and which are little discussed ( eg King Candaules (1868 )and the 1903 The Magic Mirror).

Meisner catalogues the various production details and choreography meticulously but also raises the issue of the preservation of choreography – how much today that we see in accepted ‘traditional ‘ versions of Petipa’s works is actually by him ? ( the Laban and Benesh systems of notation hadn’t been developed then. Some works were recorded by Stepanov – which were passed to Diaghilev’s Ballets Russes –but).

Marius Petipa is now regarded as one of the major choreographers of the nineteenth century .The book examines his 63 years in Russia and the many ballets he created .He is best known for the three Tchaikovksy ballets ( Swan Lake, Sleeping Beauty , Nutcracker ) but he choreographed many other works ( eg Don Quixote and La Bayadere) and his legacy lasts today. His work processes are also investigated.

As well, Meisner discusses how he changed the history of modern ballet influencing the styles of Balanchine , Massine , Fokine and others , how he also influenced the Ballets Russes ( not just Diaghilev’s ) , laid the foundations of Soviet ballet , the Royal Ballet , New York City Ballet and modern dance and championed male dancing . In some ways he is also credited with saving the ballet Giselle for us as well as Coppelia. The dominant Romantic style was replaced by Petipa’s classicism and Petipa’s style eventually led to the legendary dancers Tamara Karsavina, Anna Pavlova , Olga Spessivtseva and Vaslav Nijinksy among others.

It is divided into ten chapters, arranged thematically rather than chronologically .It opens with Petipa’ s arrival in Russia from his native France , the tempestuous socio-political tensions and revolution he experienced, his popularity ( or otherwise ) on the Russian Imperial stage, his various collaborations with other choreographers and composers (most famously Tchaikovsky) and dancers, and the conditions under which he worked, in close proximity to the Imperial court.and the backstage infighting at times.

We lean about Lucien, Marius’ brother, and his father Jean – Antoine ,who were also dancers and dance teachers and his associates Jules Perrot and Arthur – Saint Leon. Observe how they were all French and this illustrates the importance of the French school in shaping Russia’s ballet history ( Much is also made of the Italian school with for example Cecchetti and the ballerinas Pierina Legnani and Carlotta Brianza ). We also learn about Petipa’s private family life – including for example his illegitimate first son Marius, how Petipa had a savage temper , and the hidden domestic violence . We also hear about his colleague Ivanov and the behind the scenes machinations of the great ballerina Mathilde Kchessinskaya.

We also hear some tragic stories of now virtually unknown dancers like Marfa Muraveva, the rival of Petipa’s first wife, who left the stage after just seven years and died in childbirth , and Maria Anderson, earmarked by Tchaikovsky himself to be the first White Cat in The Sleeping Beauty, who was tragically injured when her tunic brushed against a spirit lamp.

At times Meisner’s style is quite dry and one could almost say extremely academic but fascinatingly ,impeccably detailed .Also the book does jump about a bit. Chapter Six – ‘ Questions of Style and Structure’ looks at some of the various reforms that occurred during Petipa’s long life at the Imperial theatres. Chapters 8 and 10 analyze the conflicting styles of the two main directors of the Imperial Theatres under which Petipa worked – how Petipa thrived under Ivan Vsevolozhsky ( director from 1881 to 1899 ) and tracks Petipa’s rather shabby treatment and being edged out under Vladimir Teliakovsky.

Without Petipa, ballet as we know it today would not exist. This is a fascinating examination of one of the major figures in dance history and an invaluable resource showing how ballet today continues a link from the Imperial Russian past to now. Next year the Australian Ballet perform Petipa’s Harlequinade in Melbourne.