This is a fascinating biography of a most adventurous, nowadays almost unheard of artist / botanical illustrator, Margaret Flockton. It has been released to celebrate the bicentennial celebrations of what we now call the Royal Botanical Gardens .It is of medium size and thickness and divided into two parts (Britain and Australia).It is extensively illustrated with Flockton’s exquisitely detailed ,delicately beautiful work .Maps and a family tree are included as well as notes , a bibliography and an index. 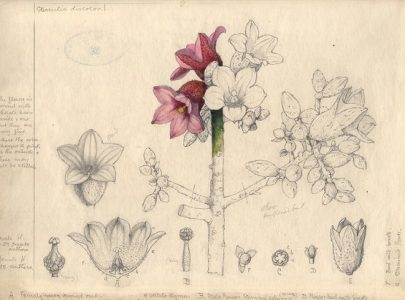 Louise Wilson has done extensive research and the book examines Margaret Flockton’s life, her work, her place in the Aussie art world – and her brave journey from England to carve a place in patriarchal colonial society in the closing part of the 19th century as a single woman. Wilson concentrated on mathematics at the University of Sydney and became the first woman in Australia to embark on a professional career in banking. After a multi-faceted career in finance and economics, she became interested in her own connection to a First Fleet settler of Australia. Of her seven published books, three are acclaimed titles about early convict settlers of the Hawkesbury district near Sydney.

Margaret (known in her family as ‘Mog’) was one of three daughters, her siblings being Dolly and Phoebe.Their childhood saw extensive change of abode and also the deaths of relatives who were affected by the appalling disease ridden conditions of the time – filthy streets , sewage disintegrating in the Thames and the heavy London smog among other things taking their toll. Frank, their father, was a watercolour artist and exhibited and sold many works. Flockton’s talent was remarked on and she attended three of southern England’s finest schools. She was lucky and talented enough to gain entrance to the Central St. Martin’s College of Art and Design, which was regarded by many as “the finest industrial art school in the world “.

Arriving in Australia in 1888 in her late twenties, she first worked as a skilled lithographer and commercial artist and during the 1890s achieved recognition in Sydney’s ‘fine art’ world. She also travelled to Charters Towers in Queensland where her sister Phoebe and family lived.She was unassuming but produced a phenomenal oeuvre.For Queen Victoria’s Diamond Jubilee , one of her paintings was included in a volume presented to the queen .By then Flockton had a secure reputation and her flowers, in particular ,were in great demand .Her work was also included in the Federation celebrations of 1901 From roughly 1904-1907 a delightful set of postcards of her work was mass produced for sale.Exhibitions of her wild flower were held in rural areas such as Bowral and Gunnedah and also Brisbane.

She was friends with leading artists of the day,such as Charles Conder, Hans Heysen and others. Her sensational paintings of the wild flowers led to her fascination with banksia, acacias, eucalypts , wattle and others,  with four plants named after her and the international award in her name. She also painted both the Australian and New Zealand version of the tea tree (‘ ti- tree ‘in New Zealand ) and the prickly pear plague of roughly 1906.As well there was a phase (roughly 1900-1907) when working with Maiden (who became Director of the Gardens ) where Flockton produced amazing paintings of lichen and fungi. 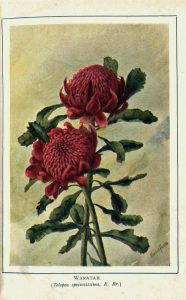 At the age of 40 she finally found her dream job,with an exemplary boss (Joseph Maiden).They were both on the same wavelength so to speak . She became well-known amongst the scientific and artistic communities of her day, but after her death in Sydney in 1953 she fell into virtual invisibility until the early years of this century .The book also highlights how talented single women were regarded and treated in during the first half of the 20th century in a heavily patronising patriarchal society – for example was she paid properly for her exhausting , extensive work? We also read about the behind the scenes political manoeuvring by some of her peers.

Wilson also mentions the lives of Flockton’s family, we see how ‘art is in the blood’ as various members of Flockton’s family also work as artists and also learn of the devastation in her family life caused by both World Wars. Flockton was in effect the bedrock of her family .But who was she really ? What was her personality? Could she have married and had children but didn’t? We don’t know as no personal papers survive.