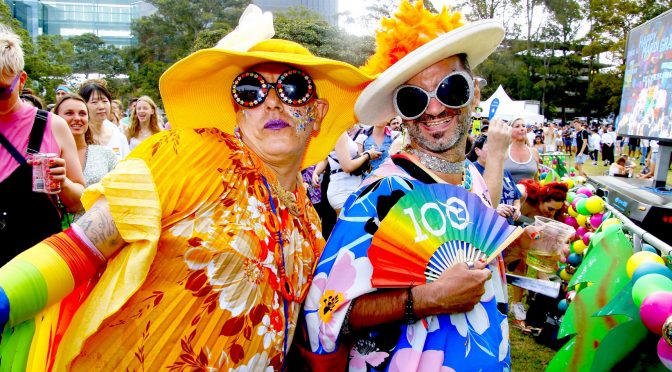 The first few months of the early part of the year are in Sydney, packed with huge events for all the public to enjoy. These events include the Sydney Festival, the Chinese Lunar New Year and currently the Gay Mardi Gras which is in full swing with a spate of shows, plays and exhibitions.

The midpoint of the Festival is the Mardi Gras Fair Day  which has been held for many years in its traditional venue, Victoria Park, Broadway. The day was full of vibrancy, colour and goodwill. The police that were present had no work to do but to pose for photos with Festival  visitors.

Spectacularly made up drag queens strolled through the park and also delighted in being photographed.

There were dog shows with categories such as fastest dog, best dressed dog, and the dog that looks most like its owner.

There were swimsuit parades, martial art displays, a temporary sculpture striking a ‘Vogue’ position together with a plethora of food stalls catering for all tastes.

People of all ages packed the park and strolled amidst other stalls spruiking queer wares and advocating such themes as gay rights, mental health services and safe sex, to name but a few, under rainbow coloured tents.

There were two main sound stages,  one was a disco party area entered through rainbow coloured arches, curated by DJs.

The other was also a huge stage which showcased some of the artists who were appearing at various venues throughout Sydney.

The nearby Seymour Centre has become the Festival hub where many performances are being staged.

The climax of the Festival will of-course be the Mardi Gras Parade on Saturday 29th February which promises to be bigger and better than ever and yet again, like the Fair, an outrageous fun night for all ages.