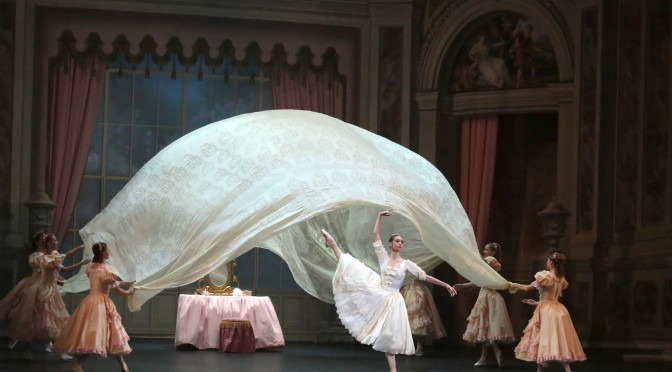 Ignore the ridiculous Victorian /Gilbert and Sullivan plot with its moral twist at the end, just sit back, relax and admire the spectacle and superb, dazzling dancing.

Yet again the Bolshoi field a gigantic cast with umpteen lines of soldiers, peasants , bandits etc. Lacotte’s choreography where appropriate is full of wonderful intricate patterns and lines displaying the corps de ballet to great advantage. Interestingly , for me, the choreography for a lot of the work seems to have a bouncy Bournonville feel rather than coming from the ‘Russian’ school, with so many beautiful bouncy soft jumps and impeccable ballon , legs rapidily beaten in lots of jumps, feet fluttering in inumerable ronds de jambe en l’air , many sequences of complicated showy jumps and turns.

The ballet is set in Italy in 1830, and its scenario, score, choreography and design are French , originally performed in 1857 at the Paris Opera.It features superlative costumes and set designs ( both , in this new version, by Lacotte ) and includes a live donkey and a dog in walk on parts . Set designs include a huge ballroom , a piazza with a Romanesque church and supposedly a massive hillside cave . Musically under the baton of Alexei Bogorad the orchestra is glorious weaving its magic with Auber’s lyrical ,very danceable score .

The ballet was revived in 1981 by Lacotte for Nureyev, and here for the Bolshoi as of November 2013.It is set in Italy in 1830, and its scenario, score, choreography and design are French. The narrative is basically a comedy, despite ending morally in its protagonist’s death. It concerns a bandit (Marco Spada); his daughter, Angela; and three aristocrats — the Marchesa Sampietri; her fiancé, Prince Federici; and Count Pepinelli — of marriageable age. The marchesa and the count are mutually attracted, but cannot marry until Spada, in the final scene, threatens Friar Borromeo into marrying them (cue joyous pas de deux).Minutes later, however, Spada is shot.

With his dying breaths, he tells (or rather mimes) a lie, proclaiming that Angela is actually not his daughter, knowing that this means the prince can now marry her without embarrassment.Or at least that is what we are told he does , but in reality Spada has a Mercutio- like death scene involving a firework series of double pirouettes, several temps levés (jumps taking off from and landing on the same foot) and repeated beaten développés into arabesque, all moves demanding great technical prowess — but not one gesture that helps explain Angela’s parentage. It’s that somewhat annoying ,silly kind of show. It is very hard for a dancer to be able to cope with Spada’s very athletic demanding variations while appearing to be old enough to be Angela’s father – brother, perhaps would make more sense.

The friar had been robbed by Spada previously but it is all so fake and obvious and rushed ( and disrespectful).We do not really see the duality of Spada’s character – noble and aristocratic one minute , bandit the next . But American guest artist David Hallberg as Spada is more than superb,dazzling and delighting in the dashing technical fireworks he gets to dance.The Ballroom scene in Act 2 is Beardsley- esque with its black and white sumptuous costumes and also features a pas de six of Harlequins and Columbines .

There are several very showy pas de deux spaced throughout the work for Angela and her father as well as the Marchesa and Count . It can be terribly confusing as to who is who actually.In Act2 I think it is at the ball, the Marchesa is glittering in white like a bride on the top of a wedding cake , with delicate and filigree fiddly choreography, and the Count has a knockout dazzling solo of fast turns and another ‘Bluebird’ like .(Not to be confused with their Act 3 sc 1 pas de deux ) .
Evgenia Obraztsova as Angela is glorious , a blossoming rose , who is sweetly defiant in Act3 as a bandit maid of all-work loyal to her father yet gallantly trying to hide her heartbreak .As the Marchesa Olga Smirnova elegantly dazzles and the other two male principal roles Semyon Chudin (Prince Frederici), and Igor Tsvirko (Count Pepinelli were also magnificently danced.

The great Fokine would have been most annoyed however, this is a classic case of exactly what he was ranting against over a century ago with the pas de deux and solos being interrupted and acknowledged by bows in the middle of them! But with dancing this amazing who cares!

Running time – allow three hours , which includes two intervals which have interviews with David Hallberg and Pierre Lacotte among others .

For more about The Bolshoi Ballet in ‘Marco Spada’, visit http://www.sharmillfilms.com.au/?p=3415