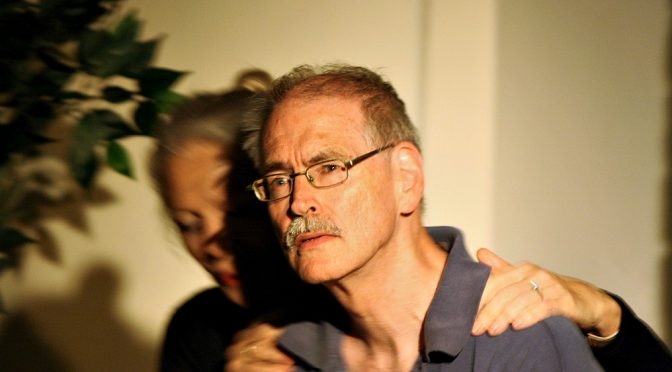 Marbles or more to the point losing one’s marbles is what has happened to poor Stanley. The play starts on Stanley’s 77th birthday. Stanley has Alzheimer’s. Natasha, his oldest daughter, has invited his two other daughters over to honour his birthday. The youngest daughter Amelia lives locally and has just had to leave her husband Rod and family for the day but Frances the middle daughter has travelled in from overseas for the celebration, if it can be called that.

The plot hinges on the fact that three years previously Stanley made, or more to the point, got his daughters to agree to signing a letter saying that if he lost his independence and became a ‘vegetable’ that they would find a way to put him out of his misery.

As the day unfolds, Frances, the militant daughter brings out the elephant in the room and confronts her two sisters saying that they made a promise to their Dad and it is time that they kept the promise. Both Natasha and Amelia don’t want to follow through on the promise. To add even more drama to the situation Amelia invites their mum Monica over to the birthday get together without telling her sisters. Natasha is furious with Amelia as Stanley and Monica had a acrimonious divorce and she doesn’t want Monica’s presence to make Stanley spiral even further downhill.

This is the second time Darwin playwright Kate Wyvill’s play has been produced. It previously had a season at the Brown’s Mart Theatre in Darwin in 2012.  The euthanasia debate is very much a live issue in Australia. Interestingly euthanasia was legal in the Northern Territory until the Federal Government intervened.  The play can best be appreciated by allowing a bit of poetic licence and going with the flow of the story.

Christine Greenough is in the director’s chair for the play’s first Sydney season and has come up with a tight, satisfying production. The play held my attention all the way through. Wyvill is a good writer, and one really felt that one got to know each of the characters very well.

Richard Cotter gave a fine, unwavering performance as the Alzheimer stricken Stanley. Key traits of his – playing listlessly with a feather, listening to the stereo loudly without the headphone cable being plugged in, especially to his favourite Shirley Bassey, placing a finger to his nose. As the play goes on, he acts out and behaves ever more strangely. We get to know that in his time he was a very successful businessman and a very tough, independent man which makes his decline even harder to accept.

Tricia Youlden impresses as Stanley’s ex-wife Monica. Monica is a straight shooter as well as being a bit of a loose cannon, and the daughters nervously watch the way she treats their Dad. She is upset to see how poorly Stanley is doing and feels for her daughters having to see their once proud and confident father now being in such a mess. She feels especially for Natasha her oldest who has taken on the role of carer so dutifully.

Sarah Plummer gave a very strong performance as Natasha – deeply, passionately committed to her role of carer to her Dad- looking after his needs, taking him to the beach and the shops, getting him out of the house. Natasha makes a comment that when they were all growing up she was the favourite one, the shining star- indicative of the sibling rivalry that is taking place.

When Natasha and Frances lock horns it is a contest worth seeing. Mel Day plays the confrontational Frances with the necessary spite and vigour. She is intent on the family fulfilling her father’s wishes. Her sisters mock her a little – that she was the precious one, the child prodigy of the family with her violin.

Emma Dalton convincingly plays Amelia, the baby of the family, a bit naïve and soft natured, no real match for her sisters. She has a young family and a dependent husband Rod. She brings the birthday cake made with liquor, sweat and tears, admitting she has a drinking problem.

There were so many good touches in this production. I liked the way Act 2 started with Shirley Bassey’s version of the Beatles classic ‘Fool on the Hill’, with the allusion being that Stanley has become like a fool on the hill. ‘with the eyes in his head spinning round and around’.

Wyvill’s dialogue was sharp. Plenty of quick comebacks and with a bit of humour. When Frances asks her sisters how do they sleep at night the retort is deadpan and quick – ‘I take sleeping pills’.

One of Sydney’s best set designers, Alan Walpole’s set  of Natasha and Stanley’s living room with rooms going off it was  very effective.

Sadly, the run of this show which was produced by Crying Chair Theatre is now over, only having a brief season (22 November- 1 December) at the Actor’s Pulse theatre in Redfern.

Hopefully Sydney will see other productions of this fine, provocative play. Darwin based writer Kate Wyvill is a writer worth keeping an eye on. She has another play ‘I’m the Queen Of Sheba’ which will be playing at the Brown’s Mart Theatre, Darwin next year starring Melissa Jaffer.