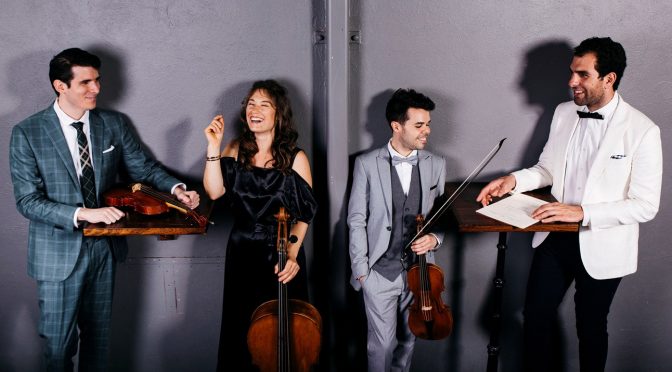 This was a joyous collaboration of two passionate and committed local early music ensembles. It took us back to a time where monarchs and patrons craved the French musical style which was de rigeuer internationally.

The six accomplished musicians explored the work of five composers through short works, excerpts from dramatic formats of the day or dance-inspired concert suites.

And dance this programme definitely did. The joyous and comfortable blending of talent presenting contrasting  pieces of music worked  very well.  Joyous performances resulted and were received enthusiastically.

A special highlight of this programme was the inclusion of two concert suites in the fashionable French style but featuring a concerto style part for a string soloist in the Italian style. These suites celebrated the French love of dance music but also displayed amazingly virtuosic passages for the soloist.

Viola da gambist Jennifer Eriksson and Baroque violinist Matthew Greco worked sensitively within the ensemble texture of these works but also dazzled us with demanding filigree above the general character of the dance movements.

The first of these concert suites was Telemann’s Ouverture-Suite in D Major TMV55:D6. The French overture styled opening was boldly played. it was a confident start to the string of dance movements. This work was imbued with a fine sense of subtle shading and contrast from all members of this concert’s new collective. Eriksson shaped Telemann’s challenging interludes of bravura for her instrument in effective broad strokes.

In the second such concert suite, by JS Bach’s cousin  Johann Berhard, Matthew Greco’s baroque violin sang with finesse alongside the other instrumentalists. The intricacies of the various dances were realised with finesse, but Greco also soared above the texture in solo display and out to the astonished listeners. This was the concert’s final offering on the programme  and a stunning conclusion to an elegant kaleidoscope of early music.

Another intimate delicacy which danced elegantly before us was the concert suite Concert pour quatre parties de violes . This was another example of the French stylistic fare, this time by four players from the ensemble, presenting the well-articluated work  by French composer Charpentier.  The contrasting dance movements were skilfully delineated.

Music from the theatre was a sharp, dramatic  addition to the event and a good way for each half of the programme to begin . It also showcased the musicians’ historically informed performance style in presenting works with a narrative or stage basis  as well as purely instrumental entertainment.

The concert opened in attention-grabbing fashion and with theatrical flair as the ensemble introduced its expressive potential by playing Lully’s Prologue from  the tragedie en musique,  Armide‘ Following interval the full ensemble welcomed us back into the world of of their study with a short energetic march from the comedie-ballet Le bourgeois gentilhomme by Lully.

Energy, committed performance and elegance were features of this successful collaboration. Informed commentary by members of the combined groups brought the music and musicians close to us. This is always a great human touch from performers in the modern climate and a good accompaniment to fine playing. Anthony Hamad’s historical perspective in this regard was as endearing, expressive and  clear as his playing throughout.

The expressive work La Sultane by Francois Couperin unfolded as a performance rich in moments of contrast, as well as balanced and lyrical  instrumental combination. The level of poise, interplay between parts and authentic gesturing  made this work drip with elegant chic and vibrant shifting colours. Even though such playing was consistent with the overall treats supplied by other items on the programme, this work was a definite highlight alongside the  Bach and Telemann suites.

This immensely successful collaboration project was a tribute to the training and talent of  members from both collectives. The Marais Project and The Muffat Collective continue with their individual 2017 Sydney concert seasons. We look forward to the next meeting of these two important early music groups.