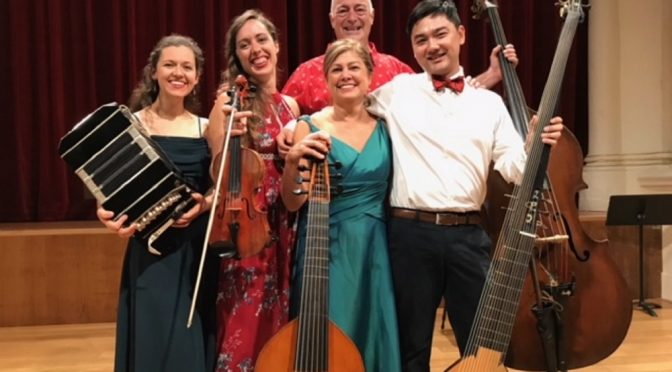 In her programme notes, founder and director of The Marais Project, Jennifer Eriksson commented that it is ‘hard to know how to add anything to the mix’ of Christmas concerts. During the final ‘Prelude in Tea’ chamber music concert at The Independent Theatre in North Sydney, such concern was shown to be totally unwarranted. Not only was a highly international programme presented capturing the history, essence and celebratory nature of Christmas, but key goals of any Marais Project concert were also satisfied.

Other Marais Project concerts typical include a work from its target composer, Marin Marais. The viola da gamba is also featured in a modern Australian context, in arrangements of music widely different to the French Baroque era. Swedish music, close to Eriksson’s ancestry, has more recently featured, and new compositions or arrangements also feature.

The festive event included six instrumentalists-two of which also sang, seven different instruments, music from at least four countries, at least four eras of music including our own and four languages. The Marais Project’s latest CD, ‘Spinning Forth’ (Move Records MCD 564), which features all the key elements mentioned above in a beautiful blend, was also launched following interval.

There were several standout moments amongst the eight brackets of pieces, which were almost all heard in innovative arrangements rather that their original format. To begin the concert, songs from major composers of the French Baroque were presented on voice plus violin (Susie Bishop), viola da gamba (Jennifer Eriksson), theorbo (Shaun Ng), bass (Steve Elphick) and bandoneon (Emily-Rose Šárkova).

In this bracket, Susie Bishop began her impressive mix of violin and voice alternating throughout each piece. Her clear and colourful delivery of the text and string playing did not wane even when three other European or South American languages were added to the mix.

In the second half of this concert, Bishop presented the deeply touching Italian Renaissance song, Canzonetta Spirituale sopra alla nanna by Tarquinio Merula. Written from the viewpoint of Mary with child, this was an expressive highlight of the programme, with beautifully focussed solo voice and finely nuanced and expertly measured accompaniment on theorbo alone from Shaun Ng. For this song, as in all other brackets, there was a clear precis introduction which assisted the audience in the absence of a large volume of printed lyrics or translations in the programme.

The work or works by Marin Marais usually included in any Marais Project event was on this occasion Suite in E minor from the Pieces de Viole Book IV  (1717). Arranger Emily-Rose Šárkova brought this work into recent times by scoring the performance for piano accordion and viola da gamba. Her instrument was extremely successful in expressing gestures in the Sarabande movement, and the tone colour and timbre of the two instruments were surprisingly complementary during this significant part of the concert.

Reference to Marais’ oeuvre also came in the form of an original work from Eriksson, catapulting the viola da gamba and ensemble far from the Baroque, as is pleasingly often the case. The Garden Party, inspired by Marais’ piece Feste Champétre was a programmatic pastiche touching even on a segment of jazz where especially Eriksson and bassist Steve Elphick were an exciting team.

The penetrating instrumental version of Swedish tune Min levnads afton (arr. Tommie Andersson) as heard on the recent recording Spinning Forth followed a live launch of the CD. The arrangement was missing it’s baroque flute part from the CD at this concert, but benefitted from the blend Andersson’s lute playing with Eriksson’s viola da gamba. Susie Bishop once again thrilled us with her violin playing before explaining and singing Swedish Christmas and party songs.

This ‘Christmas Adventure’, which benefitted from the huge range of experience assembled, ended in modern times with joyous music from South America. Emily-Rose Šárkova‘s selections celebrated the Christmas story and partying in general. This was an enjoyable end to The Marais Project’s busy 2017 and hopefully a firm start to annual Marais Project Christmas concerts to come.

For more information about The Marais Project visit: