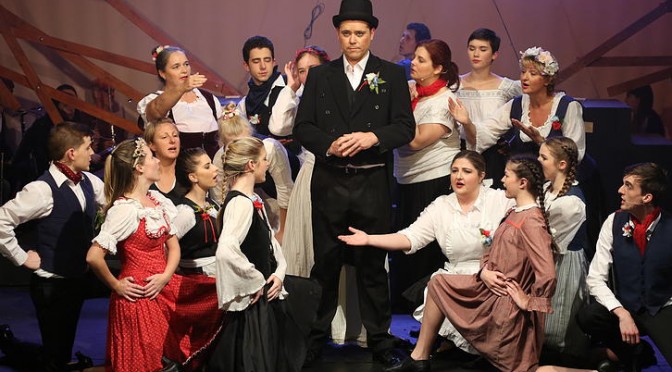 CHESS (Book by Richard Nelson, Lyrics by Tim Rice, Music by Bjorn Ulvaeus and Benny Andersson) is a classic Broadway musical drama with a great rock score. The musical has seven lead vocalists heading a large supporting cast of singers and dancers. With its complexity and its large ensemble cast, this is a musical that is rarely performed in Sydney.

This full-length epic cold war musical, initially set in the city of Milano in Italy, revolves around the politically-driven manipulation of a fictional Cold War-era chess tournament between two world chess grandmasters.

We meet Anatoly, the charming chess challenger from the USSR who is playing against Freddie, the current world chess champion from the USA, who is in a relationship with the feisty, Hungarian born Florence. who is Freddie’s second.

After interval, the setting is now a year later in Bangkok, Thailand, with the opening Top 40 song from 1984, an instant show-stopper “One Night in Bangkok”. The story now revolves around the manipulation of this world chess tournament between two world chess grandmasters. Anatoly, formerly from the USSR,) who has taken political asylum in England versus the new challenger from the USSR.

Svetlana (Anatoly’s wife), has been brought to Bangkok by the Russian government, to get Anatoly to both lose the contest and return to Russia. Instead the focus turns to the rivalry between Svetlana and Florence. With an unexpected ending to the conflict, the final game of chess is played.

This is a superb production by Manly Musical Society as directed with great vision by Ryan Fogwell. The production features an outstanding cast and dancers well choreographed by Laura-Beth Wood. Musical Director, Anthony Cutrupi impressively leads a very good orchestra.

A very fast 162 minutes, including one interval, this production is well worth experiencing in Manly, from Friday 21 May to Sunday 30 May at Star of the Sea Theatre, at Stella Maris College, corner of Iluka and Collingwood Streets, Manly.