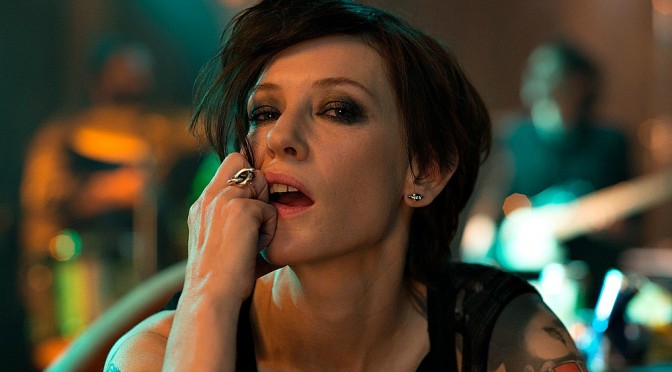 In the midst of a large, eerily dark gallery beneath the hustle and bustle of Melbourne’s busy streets, Cate Blanchett’s face plays out on one of many projector screens dangling from the gallery ceiling at the Australian Centre for the Moving Image (ACMI). These images are  part of a new multi-channel video exhibition entitled MANIFESTO featuring the work of Berlin artist Julian Rosefeldt.

Rosefeldt body of work consists primarily of experimental, adventurous short films that comprise narrative structure and non-linear video installations. In his films, Julian carries viewers into surreal, theatrical realms, where the inhabitants are absorbed by the rituals of everyday life. Within these episodic arrangements, Rosefeldt uses familiar cinematic tropes and devices to engage with dislocation, alienation and social and psychological disruption. At its heart the exhibition is an exploration of the role of the artist in society.

MANIFESTO features a total of 13 different persons ‘employed’ by Cate Blanchett as she portrays  a broad range of characters including a glamourous news presenter, a factory worker, a vagrant and even a dance instructor. At one point in each video, Blanchett’s assumed character simultaneously turns to face the camera and performs as monologues a broad spectrum  of the world’s most famous art manifestos, from the the Dadaists, to the Fluxus to even Dogma 95.

“I have used the title Manifesto as a clear statement that the focus in this work is above all on texts, whether the texts  be created by visual artists, filmmakers, writers, performers or architects – and on the poetry of these texts. It’s my intention to pull the curiosity of the viewer back to the text and the spoken word. Manifesto is a homage to the beauty of an artist’s manifesto,” Rosefeldt told The Sydney Arts Guide.

“The art scene at the beginning of the last century was still very small. To be heard, artists needed to scream extremely loud. The art scene today is a global network and business with diverse means of expression, and the manifesto as a medium of artistic articulation has become less relevant in today’s globalised and very connected art world.”

The exhibition JULIAN ROSEFELDT : MANIFESTO is on view at the ACMI, Federation Square, Melbourne until Sunday 13th March.