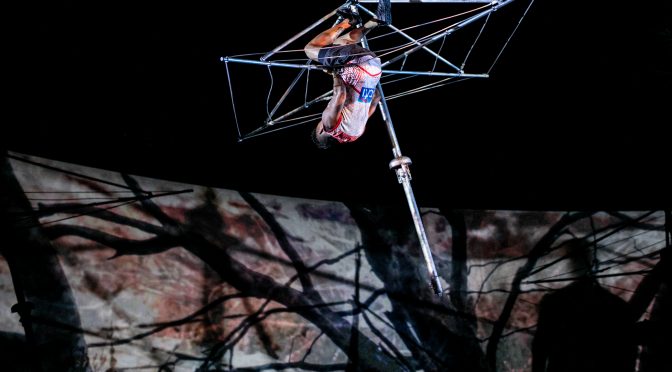 Treading gently with ancient feet or eagerly wandering on a day trip to the Blue Mountains, Australians all, we know that sound.  Memory calls as the audio and projected images take us into bush outside the town.  The ghost gums tower and the senses twitch with the recalled smell of eucalypts and the shimmer of heat on the skin.  Thus begins the bonding, empathetic and emotional journey into the pain and generational despair of our First Nations brothers and sisters.  A sharing in performance, a production resonating with resilience and love in the face of loss.

MAN WITH THE IRON NECK is an obsession for Ash who has suffered a loss far too common.  The former was a stuntman who risked, for the entertainment of others, leaping with a rope around his neck and Ash is working at survival just as The Great Peters laboured to endure each trick. We meet his girlfriend Evelyn and her twin brother Bear who are living on the edge of town with aspirations and abilities to get them away from there despite their evident strength in family, personified in Mum Rose.

This production is written by powerhouse Ursula Yovich, who also performs, from a previous work by innovative polymath artist Josh Bond (co-directing here with Gavin Robins) and created in conjunction with Legs on the Wall, the powerful physical theatre company.  The pedigree is impeccable and the product is heart-stoppingly good.   MAN WITH THE IRON NECK deals with suicide among Aboriginal and Torres Strait Islander youth with a firm hand on emotional content.  This is a production with primum non nocere at its heart and a desire to heal through engagement.  And through risk.

They take the leap, confront the danger and symbolise the fall to earth through aerial and wire work, stunningly conceived and thrillingly executed.  The setting is imposed by a tree, a big tree, with branches to climb and an interior dreamlit life of its own.  Some of the settings are rolled in but predominantly created with projection on the curve of the upstage wall so that characters can walk the wide stage to travel from indoors out into the bush in a few steps.  Right from following that first walk through the gums the images engage, especially when the video elevates above.  Echoing the theme and content also, is a clothesline and as the three kids bugger it up and try to hide from Mum, the audience joins in a shared moment irrelevant of difference.

As Mum Rose, Yovich is compassionate and earthy.  She has several moments of expressive stillness which draw the watcher into her sadnesses and her joy.  Tibian Wyles is energetic and vibrant, always on the move as Ash and Caleena Sansbury’s Evelyn is his match in shared companionship and desire.  Kyle Shilling is wonderful in the difficult role of Bear, a young man drawn to the dark despite the love abounding around him.

The physical manifestations of that soaring love and the freedom to express sorrow are skilfully woven into the fabric of the story and serve to engage the logical parts of the brain to work in concert with the emotions.  In the first flying sequence the artist is without a harness and it’s bloody dangerous. Then, in the most redolent section, the play combines audio and lighting, words and actions, the corporeal and the divine to bring hearts into universal arrest.

MAN WITH THE IRON NECK is lightly penned and the imprint of the narrative character based.  The words are few, the images are both literal and figurative and the content mightily conjured.   It’s a work to be treasured.  A theatre production, the meaning and impact of which gives ancient context to modern events and the joint humanity of which informs, educates and brings heartbeats together for love shared and griefs overcome.

MAN WITH THE IRON NECK is playing as part of the Sydney Festival 2019 until January 26. You can read a SAG interview with Ursula Yovich here. 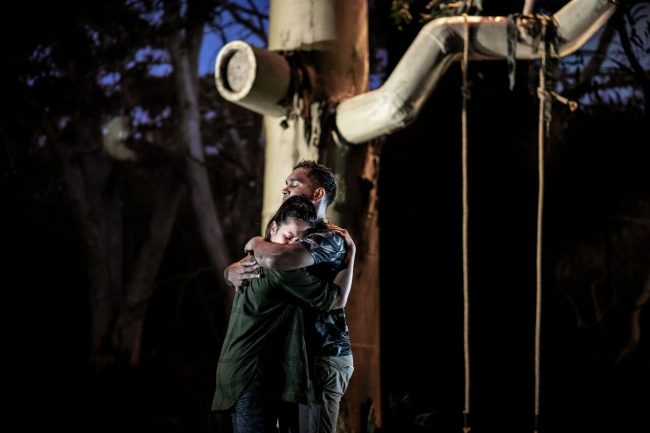 One thought on “MAN WITH THE IRON NECK. A COMMUNING OF SADNESS AND RESILIENCE”