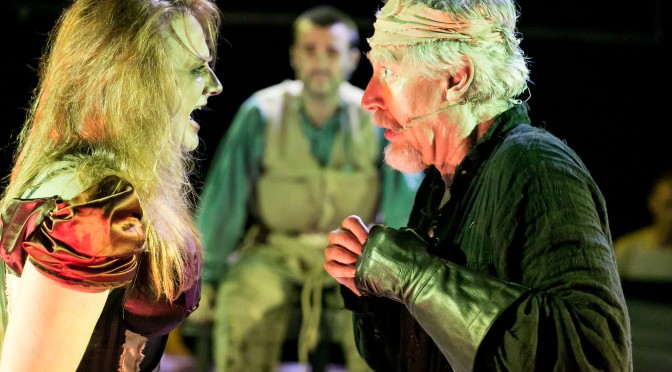 Sheldon gives a rich, robust and beautifully rendered performance, radiating not only a prodigious and well-honed talent but a warmth and generosity. There’s a palpable sense that his captaincy ignites a committed response from the rest of the cast and by thrilling osmosis a contagion of delight infects the audience.

Of course, great captaincy is supported by an inspired coach, and James Jay-Moody cements his musical theatre directorial chops by conjuring a production of sheer theatrical magic including an appearing act of his own as the barber.

Moody has marshalled an impressive cast of actor/musicians, including musical director Paul Geddes who can be seen as Paco, who work in joyous ensemble to create a marvellous treat.

Marika Aubrey is fabulously ferocious in the role of Aldonza, the world wise and weary tavern wench who Don Quixote imagines to be Dulcinea, a lady he has sworn eternal allegiance.

Don Quixote’s faithful offsider, Sancho Panza, is winningly played by Ross Chisari who does double duty as the shows choreographer.

Exquisite, exuberant, exhilarating, replete with a remarkable production and lighting design, this production of MAN OF LA MANCHA is a triumph.