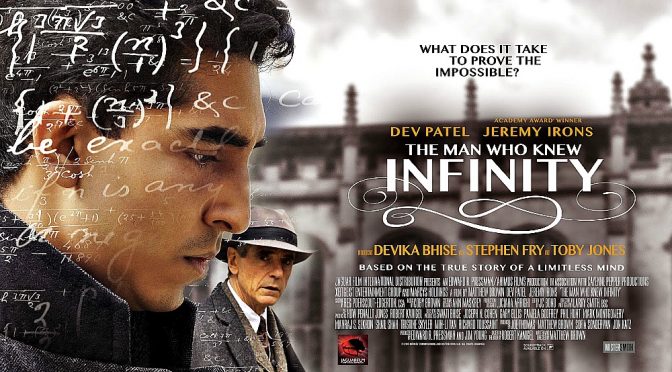 One of the eagerly anticipated cinema releases of this month is LION starring Dev Patel and Nicole Kidman. For those who missed his previous film, THE MAN WHO KNEW INFINITY, there is now the opportunity of catching up with this woefully underrated gem.Infinitely fine film that makes maths add up to a grand sum of entertainment.

Writer/Director Matthew Brown’s THE MAN WHO KNEW INFINITY shows all the pluses and none of he minuses in a sterling piece of bio-pic the equal of, if not superior to, The Imitation Game and The Theory of Everything.

Beginning in Colonial India, 1913 we are introduced to Srinavasa Ramanujan (Dev Patel) a 25-year-old self-taught genius, whose obsessive, solitary study of mathematics compels him to scratch out his calculus on the slate floors of an old temple, not such a strange place considering Ramanujan believed that an equation has no meaning unless it expresses a thought of God.

You would think such a boffin would be employed in the higher echelons of industry or education, but Ramanujan was eking out an existence as an accounts clerk in a civil engineering firm run by Sir Francis Spring, the overseer of the Indian Rail system.

With the encouragement of the man who employed him – an Indian engineer who designed the bridge that earned Sir Francis his knighthood – Ramanujan writes to G. H. Hardy (Jeremy Irons), an eminent British mathematics professor at Trinity College, Cambridge.

After ascertaining that the contents of the letter, which were accompanied by pages of formulas that looked somewhat familiar but loaded with strange symbols, were not an elaborate hoax hatched by his long time colleague, Littlewood, Hardy recognises the originality and brilliance of Ramanujan’s raw talent and despite the skepticism of his colleagues, undertakes to bring him to Cambridge so that his theories can be explored.

Newly married and with a widowed mother, the impending voyage causes domestic drama within the maths wiz household as he defies not only his domestic duties but the Brahman ban on overseas travel. Still travel he does and arrives in England on the most ominous and inauspicious of dates, June 28, 1914, the assassination of Arch Duke Ferdinand, precipitating the advent of the First World War.

This, along with the stuffy establishment of academia steeped in racial prejudice, conspired to make Ramanujan’s stay in old blighty a lot longer than originally envisioned.

Hardy, the master of mathematical formality, pushed Ramanujan for proof of his fantastic conjectures. Proof meant everything to Hardy, who says to fellow collegiate, Bertrand Russell, if I could find a proof that you were going to die in five minutes, I would of course be very sorry to lose you, but this sorrow would be quite outweighed by pleasure in the proof!

Being an autodidact, Ramanujan did not know exactly what hardy was asking for, frustrated by rehashing logic behind assertions he knew to be true, intuitively.

The young indent was not happy in England, lonely and homesick for wife, mother, and food, and a bad climate, not only weather wise but socially, where he was beaten and berated, not just by the hoi polloi but the despicable dons of arcane academe. It took its toll on both his physical and mental health.

Matthew Brown has not only put in a superb script but has made the first important step of a director – casting – an astute deliberation from top to tail.

Dev Patel adds another dazzling characterisation to his Slumdog Millionaire and Best Exotic Marigold credentials in the role of Ramanujan, perhaps a personal best here.

Jeremy Irons’ exquisite rendering of Hardy must rank as one of his highest achievements, imbuing a rigorous mental and physical discipline to his tennis and cricket loving character.

Toby Jones is terrific as Littlejohn, the laurel of Hardy, and Jeremy Northam wryly understated as philosopher phenom, Bertrand Russell.

Anthony Calf is a wonderful hiss the villain as a particularly vile Don, and there is sterling support from Stephen Fry, Kevin McNally and the late Richard Johnson, to whom the picture is dedicated.

Devika Bhise is a revelation as Ramanujan’s forsaken wife, Janaki.

Not only has Brown assembled a flawless cast, he has accrued a crew that is in total synchronicity with his vision for the picture.
Lenser Larry Smith’s cinematography is simply beautiful whether in the exotic exteriors of Tamil Nadu or the cosy cardigan interiors of Cambridge.

Designer Luciana Arrighi, Oscar winner for the Merchant Ivory production of Howard’s End, has, in association with Rajeevan, created a superlative and sumptuous stage for the drama to unfold.

Ann Maskrey’s costume design is sublime.
THE MAN WHO KNEW INFINITY, with its multiplication of talents, adds up to a winning formula of enlightening, enthralling entertainment.

THE MAN WHO KNEW INFINITY is available on DVD/Blu Ray through Icon.