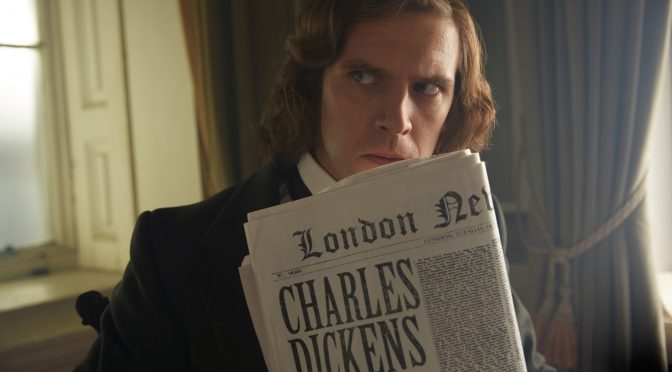 I can see the producer’s pitch huddled together at the Bar Humbug after too many eggnogs – or Martinis, olive or twist…
Let’s do yet another Scrooge story, this time an origin story, where we get the inception of the miserly monster fermented from the fevered brain of a writer’s blocked Charles Dickens.

A Christmas Carol and Scrooge and even Scrooged have been used thus far as titles in this merry go round roll over of remakes and reimaginings, so what the Dickens shall we call it??  I know, let’s call it something imaginative, innovative and festive, like THE MAN WHO INVENTED CHRISTMAS.

Lionel Bart’s dead, but what the heck we’ll make it a musical without songs and have Charlie Dickens do a kind of vaudeville performance of his character. After all he was enamoured of the theatre and was a bit of a performer himself!

Who the Dickens? Let’s cast Dan Stevens who played the Beast in that blazingly dreary live action remake of Beauty and The Beast – that was a musical of sorts. He’s the sort of Dickens you have when you can’t fetch Hugh Jackman who would only want to play it if it was a real musical. And besides, Michael Crawford’s too old.

For Scrooge, let’s get Christopher Plummer. His performance in The Sound of Music was a perfect audition for the character fifty years ahead of its time! And if doesn’t work out, we’ll replace him with Kevin Spacey!

Didn’t Jonathan Pryce play Peron in the movie Evita? Let’s get him to play Dickens’ dad. It’s a Victoriana dress up so we’d better get Simon Callow, Miriam Margolyes and Ian McNeice to dig out their wing collars and crinolines.

Hoorah! Let’s celebrate. More Martinis with olive or twist, there’ll be great expectations that this Christmas Carol will burn bright as A Yule log at the box office and not the bleak house it could suffer from high tech trinket entertainments.