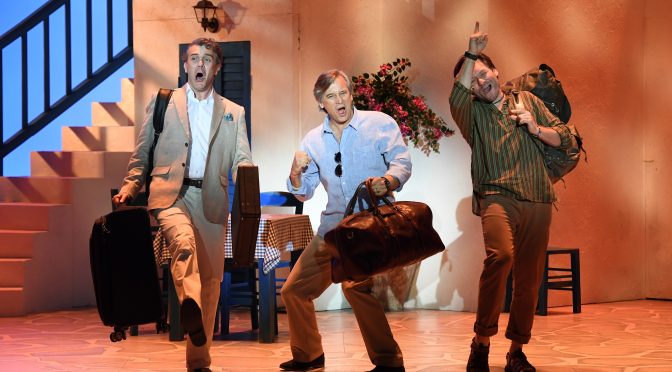 The Sydney season of  MAMMA MIA! THE MUSICAL opened in great style last night at the Capitol theatre with an all Australian cast and featured 22 of Abba’s best  hits.

Catherine Johnson’s 1999 jukebox musical, extrapolated from an original  idea by Judy Cramer, has gone on to become one of the most successful musicals ever produced.

The show’s irresistible premise allows for plenty of different comic and dramatic possibilities to be explored. On the Greek island of Kalokairi, 20-year-old Sophie is preparing to marry her fiancé, Sky. She wants her father to walk her down the aisle (‘Prologue’) but doesn’t know who he is. Sophie discovers her mother’s old diary and finds entries which describe intimate dates with three men (Sam Carmichael, Bill Austin [Anderson in the film version], and Harry Bright) (‘Honey, Honey’) some twenty years previously. Sophie believes one of these men is her father and, three months before her nuptials, sends each an invitation to her wedding, writing in her mother’s name, Donna, without letting her unsuspecting mother know. The action begins in the days coming up to her wedding.

Johnson’s quirky storyline plays out and her colourful characters come to life supported by a great soundtrack of Abba songs.

The large cast were great. Here was a cast which held plenty of confidence  and belief in the show.  They put everything out there on the stage and left nothing in reserve.

Alicia Gardiner and Jayde Westaby played Donna’s high spirited best friend, the very loyal  Rosie and the much married Tanya, part of the Dynamo team, who were so excited to join her on the Greek island and be part her wedding celebration.

The three unsuspecting ‘fathers’, each with very different personalities, were well played by Ian Stenlake  as Sam Carmichael, the man who Donna was most keen on,  Phillip Lowe played Harry Blight and  Josef Ber played Bill Austin. Stenlake, in particular, shone in a few scenes and showed he was in good voice.

The cast received a standing ovation on opening night and responded by exuberantly re-performing a few of the main numbers, much to the glee of the audience who were dancing along.

Recommended. Here is a show to embrace. It was made in a spirit of light heartedness and fun, and you just have to tune into/run with that spirit. Just like when one of the performers did cartwheels across the stage. Just like when there were, at times, chuckles from the audience at how clumsily the storyline segued/cued into one of the legendary Abba songs. It felt like – let’s just get this song in, wherever we possibly can. Let’s not fuss about it too much! Let’s just keep it flowing!

I left the theatre thinking-  how good was that!

Treat yourself. The Sydney Season of MAMMA MIA! THE MUSICAL is playing the Capitol Theatre until the 6th May.  The show runs for 2 hours and 30 minutes with one 20 minute interval.

Performance times are Wednesdays 1pm and 3pm, Thursdays and Fridays 8pm, Saturdays 2pm and 8pm and Sundays 1pm and 6.30pm.