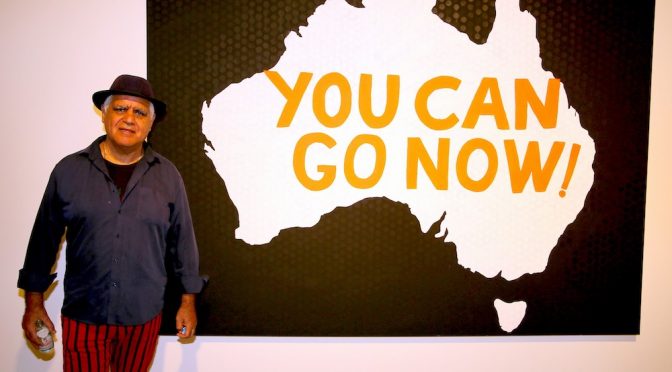 The largest Australian solo exhibition by artist and activist Richard Bell opens tomorrow at the Museum of Contemporary Art Australia (MCA). You Can Go Now brings together over 30 years of the artist’s practice from the early 1990s through to 2021. The exhibition will be accompanied by a series of public talks in solidarity and resistance that pay homage to and reflect the values of the Aboriginal Tent Embassy.

Richard Bell is one of Australia’s most important contemporary artists. The exhibition You Can Go Now brings together all facets of Bell’s life, reflecting on the person, the artist and activist. Known as an eviscerating political commentator, who shifts between the personas of artist and activist, Bell is internationally renowned for his practice. He uses humour and satire to address important issues around representation, identity politics, nationalism and neo-Liberalism and the perceptions of Aboriginal art within a post-colonial history and framework.

Visitors will be challenged with serious content as well as entertained by works that are humorous, poking fun at the status quo. For Richard Bell, You Can Go Now at the MCA presents the opportunity to educate, challenge and empower.

“My shows are always an act of protest. I make art for other Aboriginal people and I want my art to be empowering to them. This body of work reflects a long history of Aboriginal protest. I want audiences to be challenged,” said Bell.

Curated by MCA Senior Curator of Aboriginal and Torres Strait Islander Collections and Exhibitions, Clothilde Bullen, the exhibition draws together nearly 40 artworks created across a range of mediums, including painting, installation and video, from major public and private collections, as well as key early works from the artist’s own collection.

“This major survey exhibition is the most comprehensive presentation of Bell’s work to date. It examines how he uses the art of protest and tools of appropriation to create multilayered works that comment on the power dynamic between First Nations people globally and locally and the non-Indigenous people with whom they share post-colonial spaces,” said Bullen.

The exhibition reflects the long relationship between the MCA and the artist and will include several key works drawn from the MCA Collection, MCA Director Elizabeth Ann Macgregor OBE said the Museum is honoured to present a large-scale survey of the artist’s work.

“It is a rare moment in time when a major contemporary art institution can present the work of an artist who has significantly shifted the discourse locally, nationally and internationally of First Nations people. In this moment, so unprecedented in terms of its global revision of race relations and its reckoning of historical, social and economic inequalities across communities and countries, Bell’s exhibition is more necessary and timely than ever,” said Macgregor.

Born in 1953, Queensland, at time when Aboriginal people had no citizenship rights, Bell is a descendant of the Kamilaroi, Kooma, Jiman, Goreng Goreng peoples. The artist’s early activism and strong connections with the Aboriginal community in Brisbane under the Bjelke-Petersen regime (1968–87), and his relationships with important activists in Redfern and Sydney are all contextualised in the exhibition, as is his close relationship with important international figures of the Black Power movement, such as his friendship and ongoing artistic collaboration with American artist and activist Emory Douglas.

Exhibition highlights include significant early works such as the first iteration of Bell’s Theorem (2002), which questions the commodification of Aboriginal art and was created at the same time as his famous ‘Bell’s Theorem’ manifesto.

Also featured in the exhibition is the large-scale painting Scientia E Metaphysica (Bell’s Theorem) (2003), winner of the 20th Telstra National Aboriginal and Torres Strait Islander Art Award. In this work the artist proposes that “Aboriginal Art is a White Thing” driven predominantly by a Western art market.

A number of video artworks will also be on display including the highly acclaimed Imaging Victory trilogy, which includes the 2008 work, Scratch an Aussie. For this piece, the artist collaborated with Aboriginal historian and activist Gary Foley to create a satirical video in which Bell plays the therapist for a group of teenage Australians.

A major component of the MCA exhibition will be Bell’s Embassy (2013–ongoing), a recreation of the original Aboriginal Tent Embassy, the world’s longest-running protest occupation that was first assembled on the lawns of Parliament House in Canberra in 1972. Bell’s Embassy provides a public space for retelling stories of oppression and displacement and imagining a new way forward. The ongoing project has been exhibited at numerous international exhibitions, including the Sydney Biennale, Performa, New York, and the Venice Biennale.

In 2017, Bell’s Embassy was co-acquired by the MCA and Tate as part of the ground-breaking International Joint Acquisition Program, made possible through a $2.75 million corporate gift from the Qantas Foundation in 2015. The work will go on display at Tate Modern’s Turbine Hall in 2022, to mark the 50th anniversary of the original Aboriginal Tent Embassy.

Activating Richard Bell’s Embassy is a series of events on solidarity and resistance, addressing the most pressing cultural issues in contemporary society. Audiences are encouraged to be part of the conversations as guest speakers give voice to the cause. The exhibition will also be accompanied by the Digital Embassy, a sovereign digital space where the Embassy program will be live-streamed and archived, along with an open forum where everyone is encouraged to respond to the ideas shared within the program.

A richly illustrated publication contains a comprehensive overview of Richard Bell’s artistic practice with contributions from writers Gary Foley, Zoë De Luca, Ryan Presley, Maura Reilly and Clothilde Bullen. The catalogue will be published to coincide with the exhibition’s opening and available to purchase from the MCA Store, online and onsite.

Richard Bell’s Embassy: A series of events on solidarity and resistance

Featured image : Richard Bell in front of his painting  ‘You Can Go Now’. Photo Ben Apfelbaum