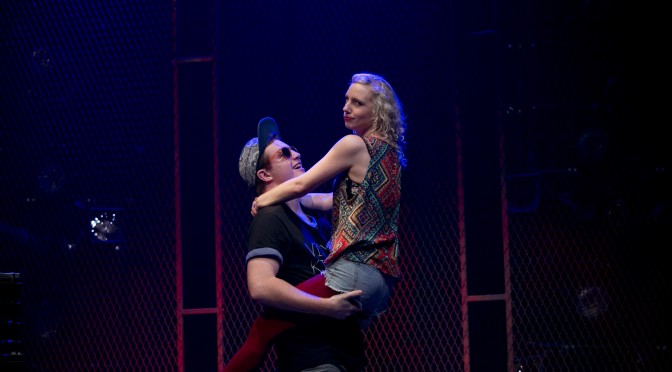 Is the divide that has always existed between the generations growing greater and greater as advancements in technology make further and further inroads into our lives?

I think that it would be fair to say that popular opinion would very much answer this question in the affirmative.

One of Australia’s finest young playwrights, Lachlan Philpott, throws a different, brighter light on this whole issue with his new play, M.ROCK. The play’s romantic notion is that the universal love of music has the power to bridge the gap between the generations.

In M.ROCK a wayward young woman who has been traveling around Europe and getting more and more taken over and consumed by her experiences, finds herself brought back to earth by her grandmother who makes the big trip over to Europe to find her, and proves much groovier and hipper than many of her companions.

Philpott based the character of the grandmother on a real life person, the late Ruth Flowers (1940-2014) from Brighton, England, who re-invented her life in her eighties by becoming Britain’s hippest and oldest disc jockey, even hosting parties at the Cannes Film Festival. (Her website is still current- www.mamyrock.com and makes for some stunning reading! Her daughter wanted to sign her into a nursing home. She was only interested in signing record contracts!).

Fraser Corfield directs the action smoothly and is well supported by his design team; set designer Adrienn Lord, lighting man Benjamin Cisterne, and sound designer Jonny Seymour, who is also the Big Daddy at the top of the stage, mixing up the music.

The supporting cast, Joshua Brennan, Madeleine Jones and Brandon McClelland, play an assorted group of characters that grandmother and granddaughter come across in their travels with ease and style.

A Sydney Theatre Company and Australian Theatre for Young People co-production, Lachlan Philpott’s M.ROCK opened at the STC’s Wharf 2 Theatre on the Saturday 14th June and is having a two week season, playing until Saturday 28th June, 2014. Running time is 90 minutes without interval. Well worth tuning into.