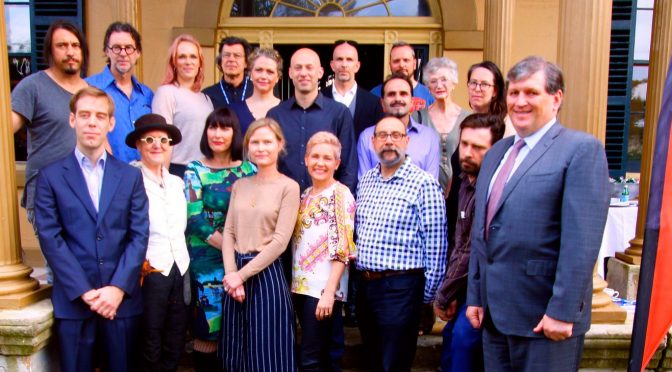 This years Doug Moran National Portrait Prize (DMNPP), has gone to emerging artist Lynn Savery. The Prize is Australia’s richest art prize with Savery being the recipient of $150,000. This is Savery’s first major art prize. She has certainly started at the top! The DMNPP is believed to be the world’s most valuable art prize.

This year’s judges were artist and former winner of the DMNPP and Archibald Prizes’  Louisa Hearman, Ron Radford AM, the former Director of the National Gallery Of Australia  and Greta Moran, Co-Founder and Director of the Moran Arts Foundation.

Richard Moorecroft was the emcee for the event which took place at Juniper Hall, where the work of all thirty finalists are being exhibited. Peter Moran, Managing Director, Moran Health Care Group, spoke briefly and then passed the microphone to Louisa Hearman who announced the winning entry.

Hearman said, “A painting for me when it is really good is an object in space that not only makes me think but also entices me to keep looking at it. Each time i look at it  see more, I think more and the more it makes me do that, the more it is, in my mind, a good painting. The winning painting is exactly that, an object that we naturally wanted to keep looking at. Each time I look I see fascinating things to contemplate.”

Ron Radford AM had this to say, “We were in agreement about the winner, we admired the meticulous attention to detail and beautiful placement of the figure and her dog in the picture composition. The portrait had a real impact in its direct gaze to the viewer as only a good self portrait can achieve. Her colouration was finely calculated, overall a very engaging portrait.”

Each year the DMNPP invites entries of original works from Australian artists capturing Australians from all walks of life, whether a public figure or someone from their own circle of experience.

This year there were  1,300 entries received which were culled to some 129 entries by veteran art critic Daniel Thomas AM. From this pool of semi-finalists the judges made a further cull to thirty finalists. Each of the finalists received $1000.

2018 marks the 30th anniversary of the DMNPP. To celebrate this milestone visitors to the exhibition will not only see this year’s finalists but also on display are some of the winning artworks from the past thirty years, including artistsof the quality of Ben Quilty, Vincent Fantauzzo, Nigel Milson, Tim Storrier and Prudence Flint.

The  Doug Moran Portrait Prize Exhibition opens to the public at 10am on Friday 2 November at Juniper Hall, 250 Oxford Street, Paddington and runs until Sunday 16 December 2018. The exhibition is open Thursday to Sunday from 10am to 4pm and there is no entry fee.