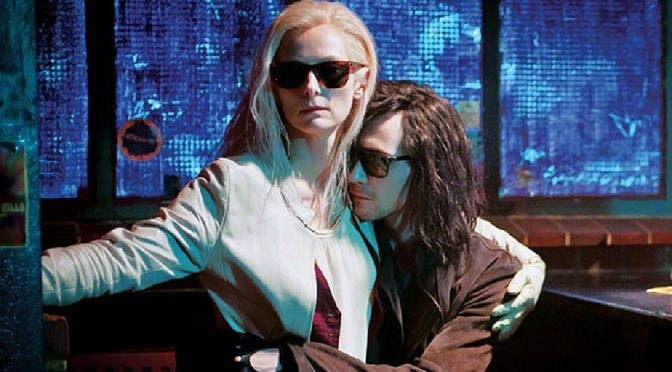 Jim Jarmusch has snatched the vampire story from the snivelling snot nosed tweenies and transfused it into an intelligent, funny, literate love story in ONLY LOVERS LEFT ALIVE (M).

With so many movies going for the event status, ONLY LOVERS LEFT ALIVE goes for the experience quotient.

From the opening aerial shot of an old 45 revolving and morphing into shots of the lovers, Adam and Eve, Jarmusch weaves his mesmerising bohemian story of enduring love and curiosity.

Adam and Eve are vampires. They have been lovers for millennia. He’s a reclusive rock n roller holed up in Detroit. She’s the eternal expat living in Tangier. Her neighbour is Christopher Marlowe, undead Deptford man and author of the Shakespeare canon.

Adam’s only break from hermitage is a young man who procures things for him – mostly vintage guitars – and a hematologist in a hospital who supplies blood.

Blood, as well as being nourishment, is narcotic to vampires, and the great struggle for living vampires in a contemporary world is to find untainted blood.

Sensing Adam is harbouring suicidal thoughts, Eve leaves her North African abode to visit her vampire mate. Here they rekindle their relationship while taking long drives through the darkened and deteriorating streets of Detroit.

Into their idyll life comes Eve’s sister, Ava, a brash, bratty kid, as self centred as her sister is self controlled. Her selfishness wreaks havoc on Adam and Eve’s reunion and her illicit feeding elicits one of the welter of this film’s great and memorable lines.

Jarmusch’s script is alive with art, music, science and philosophy and has a deliciously sly humour running through. His naming of Adam’s blood dealer as Dr. Watson might be taken as a playful bow to Sherlock Holmes, but a Thomas Watson was also a contemporary of Christopher Marlowe, and praised as Shakespeare’s heir.

Tim Hiddleston as Adam is the embodiment of Byronesque black leather bohemian bad boy and Tilda Swinton is exquisite as the ethereal and elegant Eve.

As Ava, Mia Wasikowska is the epitome of the surly Me Gen.
John Hurt as Kit Marlowe, Anton Yelchin as Adam’s zombie gopher, and Geoffrey Wright as the blood dispensing doctor round out a sensational supporting cast.

Stunningly photographed by Yorick Le Saux, with a retina burning production design by Marco Bitner-Rosser, cossies by Bina Daigeler and a sublime score from Jozef Van Wissem, ONLY LOVERS LEFT ALIVE is a dead set gem.