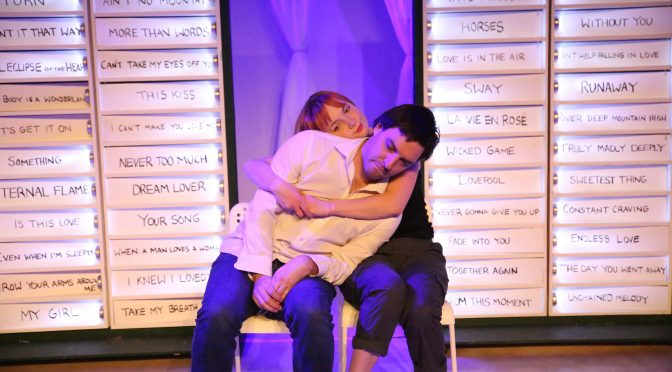 Sadly unable to attend LOVE SONG DEDICATIONS (WITHOUT RICHARD MERCER) on the night I had nominated to go with my friends, I texted next day to see what the show had been like.  “Energetic and clever and the finale is amazing!” one thumbed back, with appropriate emoticons.  Having actually got to the show this evening, my work here is pretty much done . . . because that’s what I saw too.   Doubly sadly, I don’t have emoticons but in general terms    . . .  :-):-):-) . . .

For anyone confused o.0.0.o  by the name of the show  . . . Richard Mercer was a radio host who had a show called Love Song Dedications which ran 3 hours on a weeknight, late, for 17 years.  It was a much loved program and all sorts of people would ring and dedicate, obviously, a love song.  And the host was warm with a unique baritone voice that men, women, young, old poured their heart out to. The show ended in 2013 with Trisha Yearwood’s ‘How Do I Live (Without You)?‘

But here in 2018, best friends from childhood, Tom Hogan and Bonnie Leigh-Dodds are not intimidated by ‘The Love God’’s final choice, they are bent on finding a definitive answer to the question of what is the best love song of all time! <3   And they have a pretty fun time doing it.  The show is hilarious, surprisingly touching  :’(  and very fast paced.  There is also a neat physical conceit for controlling and narrowing the choices and an especially nimble way of avoiding copyright infractions.  Though Baz Luhrmann might be pissed that he could have saved a mill or two with this pair’s inventive staging.  Their props and costume changes are so choice that they simply transport the characters, and you, to wherever.  As does the very, very okay . . .  one more . . .  very, clever musicality.

Now me, I can hear an opening riff and I might just get it.  A few lalala’s or oooo’s, same.  Hit me with a bit of chorus and I’m right there.  Hand write “Nothing’s going to stop us now” or “I got you babe” and I can hum the tune-ish, sort of, um   . . . with help!   What Leigh-Dodds and Hogan can do is flip between all of these in moments.  A sting or sling and they can hum a tune absolutely precisely before completely expressing a different song with perfect clarity and recognition.  Plus, they have a terrific third partner in the techie who has needle sharp cueing but whose name I couldn’t catch.   =(

Character-wise Bonnie is obviously the brains of the operation and has the girly pleading, bleeding heart with Tom the rationalist, slightly bewildered, along for the ride guy especially in the comedically synchronised, brilliant non-verbal stuff during which he is disarmingly unco and she is pinpoint on metaphor and meaning.  And they are not afraid of a bit of slapstick or hairbrush reminiscent singing either.

Gender and the gendered response to the songs is touched on :-/  .  As is #Metoo.  Big whoops from the audience here.  This audience is lovin it.  It’s a such a human show, so, it has to be said, loving.  The performers are incredibly close in this setup such that audiences comment and cheer and we turn to strangers and laugh and smile at each other and laugh together on our way out of the venue, strangers no more.

Laughing about the amazing finale and secretly admiring the  stunning craft that is excellence in execution.  And elocution.  Listen to Tom zig off an astonishing list of well-known singers that just keep on coming or watch Bonnie whip up a crowd to fever pitch and you are seeing quality creation and expression.