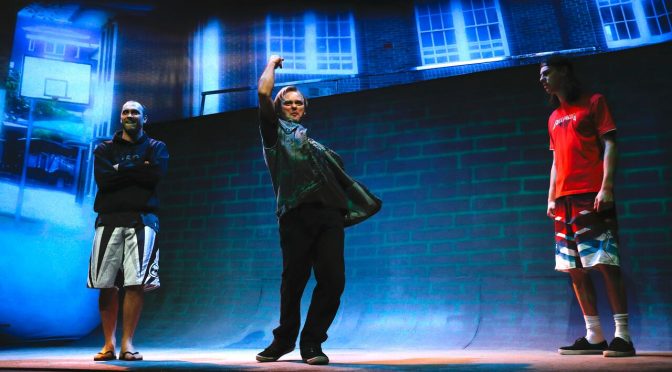 Gay people were chased, beaten and killed by teenage gangs in Sydney beachside suburbs from the late 1970s to the mid 1990s and LOST BOYS, from writer Lachlan Philpott, has crash tackled and wrestled the issue into the limelight.  Though there have been other TV and theatre around the topic, LOST BOYS puts the perpetrators front and centre with a chilling normalcy.

Kids, they are just kids.  Teenagers in 1989, brothers Cy and Robert Murphy have a slightly distant father, the Vietnam War and loss of loved ones changed a generation, but there’s a loving and engaged mum to balance that out.  Cy has a girl who he obviously adores, Jill, even if he doesn’t really get her ambition to go to uni and become a journalist.  He’s more of a hang out and party with his surf buds, including his dopey mate Glen, kinda guy.  He and his mates acts of brutality as culturally entrenched as stealing alcohol from parents or a grommet showering the sand off after a goofy foot day on the board.

If history has taught us anything it is that some perpetrators of violence are capable of leading normal lives and in Act 2 we meet the 3rd generation of Murphys.  A normal family, in the same house that CY grew up in.  Cy and Jill have been long term married and looking forward to going to Bali for the honeymoon they never had.  The TV is different, the school is different and the society is more enlightened, especially in regard to the gay community.  The police force has changed too.  The remembrance of those poofter bashings has resurfaced and investigations are renewed with fervour and a rigour not evident at the time.

In Act 1, LOST BOYS is episodic, relatable and surprisingly funny.  Short, pithy scenes follow upon each other.  The TV was the centre of family life and references to Alpines and Sizzler and Australis are used to considerable comic effect. A little nostalgic chance to laugh at the good times but, subtly, the underbelly is exposed as we get to know these characters better.  And it’s not exaggerated as that simply is how many of us talked then.  It was before minority rights and second wave feminism, it was a time when we lived to watch our boyfriend surf.

For an audience, there is a really seductive certainty in the early part of the narrative.  There’s a comfort in that knowingness despite the inevitability of what will happen.  When it does happen, it arrives implied and watched rather than overt.  In those visually still moments and in the relation of events, it hits hard.  And Jill is complicit.  The conceptualization and realising of LOST BOYS is brilliant and the dramatic device used to bring girls into the gang is a gutpunch.

The second act subverts any comfort. Our characters might be all grown up but they are played by different actors and the cast changes engage the intellect immediately.  There is less direct speech and less propelling of story here, it’s more character driven and the contemporaneousness is as important as the historical.  The play has important things to say and important times to reflect in this act but it’s a long act and, for me, the power is somewhat dimished by didactics and too many small climactic moments.  But if our breakfast conversation is anything to go by the impact is unmitigated.

The cast is a very polished ensemble of Josh Anderson, Adam Booth, Jackson Davis, Lucy Heffernan, Jodie Le Vesconte, Ben Pfeiffer, Jane Phegan and Lincoln Vickery.  Davis is very effective as the young CY.  He has a swallowed intensity and the menace of a leader yet Davis also foregrounds Cy’s tenderness, as Cy understands it.  Heffernan as Jill is also terrific at endowing contrast.  The burden of class and culture at war with aspiration during a time when we know young women’s lives were easily “fucked”.

As the older Jill, Jane Phegan vibrates with repression and the determination to keep her family close, even if only to prove to herself that her choices were the right ones.  Even pissed she doesn’t drop her guard. Also excellent is Josh Anderson as the poorly socialised Glen, who grows up disenfranchised and disillusioned. He is the only actor to play both the younger and older versions of the character and Glen’s entry in Act 2 brought a collective gasp of despair from the audience.  He reeks of deadbeat and shuffles an entirely new conversation on with him.

This was due, in no small part, to the costuming.  Designer Katja Handt and Projection Designer Mic Gruchy touch the heart with the visuals for this show.  Costuming is effective without being fussily period and the set and graphics excel. The large toilet block, nautically sloped and railed, with a downstage skate ramp evoking a wave, works effectively both as a blind, an upper level and as a projection surface.  The videos are accessible: sometimes hilariously so … think drunken karaoke; sometimes breathtakingly beautiful when one can almost smell the ocean sweeping up from the cliffs below.  The rock pool on the floor shimmers in the moonlight or lashes with intent as the passions rise.

Utilising the 3 projectors to considerable effect, one sees detail and double up in the content, especially when the images break realism at times to engage emotions and flare the logical left brain as you puzzle them to analyse their visual text.  The lighting is the same.  Jasmine Rizk’s design obscures in many places when the steel hits the characters horizontally from the side and the faces require direct audience attention.  Using a limited palette of light and dark purply tones on the cyclorama adds to the dramatic effect and the blue for night scenes is delicately restricted.  The audio design (Daryl Wallace) is just as restrained.  The thump, rhythmic, bass and pulse redolent under the first assault never overwhelms and stands in direct contrast to the light, chimeish, tinkle which is high under the second assault.

Director Leland Keen has a stunning vision for this show.  Technically LOST BOYS is cleverly evoked time and place, artistically it is excellence in performance and intellectually is wonderfully imbued with an understanding that history and injustice requires capture and documenting.  This is, though, a new work and there are things to be said.  The very many entrances in the play as the short scenes tumble after each other for example, on a bigger stage, might benefit from overlap but there is DNA deep legacy here.  It is not graphic or egregious but states its case with the same certainty that my friend expressed her over breakfast.  Someone must know.  And I would add: We must remember.

Make the trip to the IPAC to see  LOST BOYS, it’s as entertaining as it is important and you can read an interview with Lachlan Philpott here.