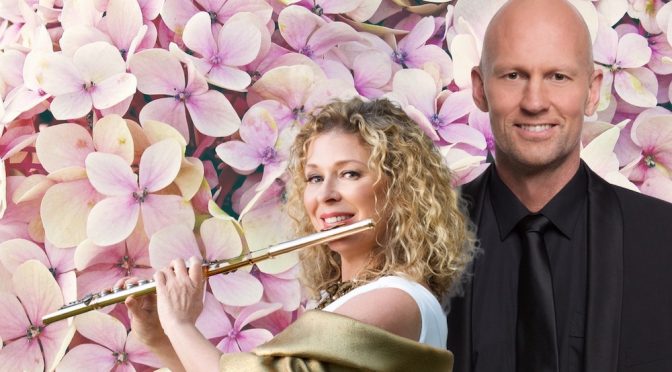 Featured at The Concourse Chatswood is the ‘Live at Lunch’ series produced by Jane Rutter. The series has been running for 10 years starring new guests with Rutter for each performance. It’s a brilliant concept where the show runs for an hour starting at midday followed by an optional lunch at a neighbouring restaurant with the performers. Here, audience members can speak directly with the performers, collect photos and autographs making an intimate and memorable experience.

Rutter originally studied with Jean-Pierre Rampal in Paris and, after many years of professional contribution to the Arts, was awarded Chevalier de L’ordre des Arts et Lettres from the French Embassy. She has built a large following of adoring fans who are dedicated to her concert series at the Concourse as well as her regular regional tours. Joining her today was international bass opera star Teddy Tahu-Rhodes accompanied by renowned pianist John Martin in a concert titled “Figaro Flute and Flowers”.

The concert, which took place today Wednesday 31 March 2021, opened with a hilarious, bespoke rendition of Largo Al Factotum, the most famous aria from Rossini’s The Barber of Seville, with Rhodes being comically upstaged by Rutter on piccolo.  The program swished and swayed between a diverse array of musical genres from a Baroque solo featuring Rutter’s 300 year old ebony tipped flute to French Romantic and Musical Theatre. There were Celtic and English folk songs where Rutter pulled from a collection of flutes, recorders and penny whistles. The ensemble played tribute to Australian Baritone Peter Dawson with favourites including “The Floral Dance” by Katie Moss.

Every part of the program was delightful and the audience were keen to show their appreciation. The concert was recorded to be broadcast on the Melbourne Digital Concert Hall on the same evening. Check Rutter’s website for the next dates of the “Live at Lunch” series at The Concourse. They are usually once a month throughout most of the year.