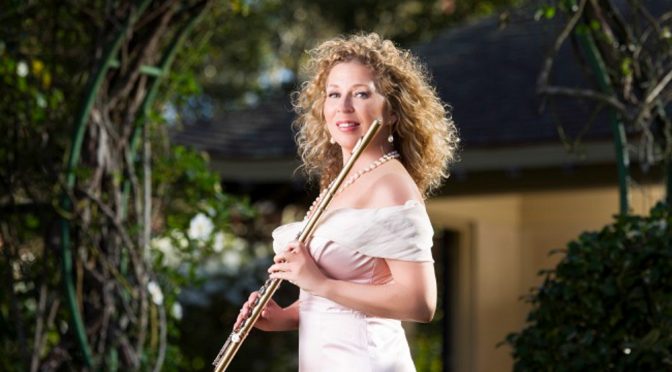 The packed audience was swooning with delight at the latest Live at Lunch concert at the Concourse entitled LOVE SONGS AND LULLABIES.

Colagiuri and Tahu Rhodes both looked debonair in magnificently cut suits whilst Rutter was elegant in white and silver.

The program opened with the bright, seductive Non Piu Andrai from Mozart’s The Marriage of Figaro.

Next was Ombra Mai Fu from Handel’s Xerxes. Rutter’s flute was lush and languid, whilst Colagiuri playing was powerful and passionate. Rhodes was charismatic and hypnotic.

Then we heard Le Papillon et la Fleur (The Butterfly and the Flower) by Faure, with its darting melodies (as if the butterfly is flying between various flowers).

Berceuse, also by Faure, was given a lyrical performance with its aching melody.

Ich Leibe Dich (I Love You) by Greig was next a powerful, swirling, rippling and cascading passionate piano solo for Colagiuri.

This was followed by a beguiling Some Enchanted Evening (from Rodgers and Hammerstein’s South Pacific, the evergreen musical which Tahu Rhodes has starred in).  The  arrangement started rather hesitantly but became wistful, assured and passionate.

Rutter then talked about how Tahu Rhodes had inspired her son to become a musician.

We next heard Kreisler’s Liebesleid for flute and piano, lush and romantic, and featuring a lilting, waltz like melody which turned quite fiery.

Rutter then told a couple of jokes about her purchasing her now trademark golden flute, which led to a jaunty version of Moss’ The Floral Dance.

The concert ended in thunderous prolonged applause. The encore was a joyous, enchanting rendition of  A Nightingale Sang In Berkley Square.

We all then left for lunch with some of use b buying CD’s that were available on the way out.

Running time – just over an hour no interval.

There was one performance only at the Concourse of LOVE SONGS AND LULLABIES as part of the Live at Lunch series which took place on 18th  October.