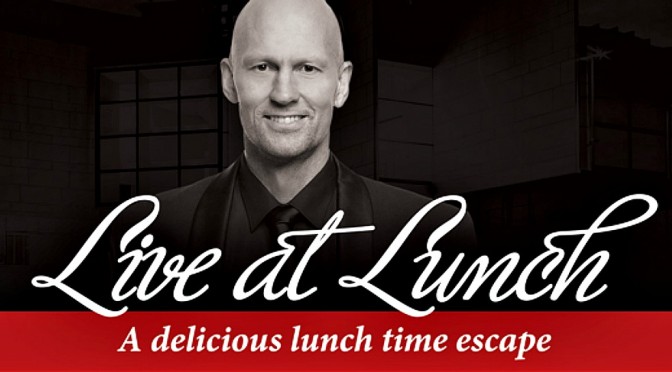 The first of the 2016 programme was entitled Classical Heroes and the Art of Seduction . We were privileged to have international opera and musical sensation divo Teddy Tahu Rhodes as special guest to enchant us. The concert’s chosen theme was love and seduction.

Curator of the series, internationally renowned flautist Jane Rutter, welcomed us and then introduced Rhodes, who came on stage on crutches after a recent accident. Rhodes mostly sang, perched on a stool.

Rutter wore a white long sort of tabard like top with sequin detail and a long apricot coloured skirt with splits at the sides. Rhodes was casually but snappily dressed in jeans , a white shirt , blue tie and a dark jacket.

Rutter and Rhodes were elegantly accompanied by Vincent Colagiuri on piano .

First on the programme was the yearning, lyrical An die Musik by Schubert, a  piece which showed off Rhodes passionate, dark chocolate voice.

Then much fun was had with the rapid, tongue twisting piece Largo al Factotum ( Figaro , Figaro , Figaro ) from Rossini’s The Barber of Seville which was performed in a joyous , bubbling version for voice flute and piano.

The exquisite, floating Ombra Mai Fu by Handel followed , with its haunting, aching adagio. For this piece, Rutter used her special 1870 French flute.

Then came the waltz like, in this version anyway, Tamino’s aria from Mozart’s The Magic Flute,  here arranged for piano and flute to showcase Rutter’s magnificent playing , which led into Papageno’s cheeky, bird catching song from the same opera.

Tosti’s rather melancholy and reflective Vorrei Morrire was next full of Romantic passionate piano with Rhodes in glorious voice.

This was then followed by a delicate, rippling, quite angelic version of Schubert’s Ave Maria– a passionate, soaring, pulsating prayer for flute and piano. This piece saw Rutter on her favourite gold flute.

We then jumped to the delightful Rogers and Hammerstein’s It Might As Well Be Spring from their musical State Fair. The arrangement was by maestro Tommy Tycho.   It Might As Well be Spring was followed by the piece from Carousel,  persuasively sung by Rhodes.

For the encore there was the wickedly witty Old Fashioned Wedding from Irving Berlin’s Annie Get Your Gun, with Rutter joining Rhodes in singing and the duo had much fun with it.

With House Full signs out the front before the concert and some music lovers having to be turned away it is advised to book early if you are interested in catching of the upcoming concerts in this delightful series.

Running time – roughly an hour and ten minutes no interval.

Live at Lunch: Classical Heroes & the Art of Seduction