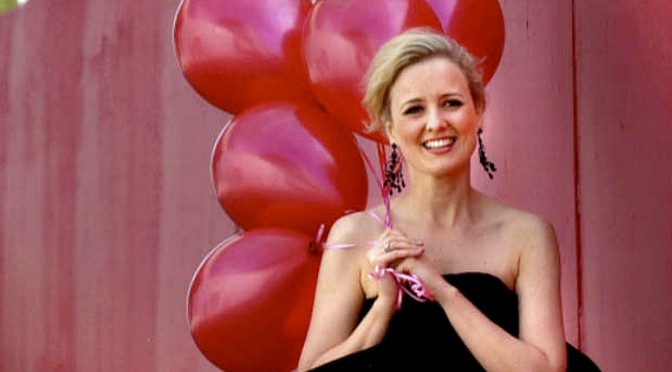 The latest splendid LIVE AT LUNCH concert was entitled ’ Strauss, Ravel Canteloube’‘ and featured curator Jane Rutter on flute (and assorted other instruments), Vincent Colagiuri on piano and quadruple threat ( yes quadruple threat) and Opera Australia star soprano Taryn Fiebig both singing and playing the cello (who knew that she had majored in cello at WAPPA?! ).

The roughly ¾ audience in the stalls consisted mostly of those over 55 although there were a few younger.

Rutter was stunning in a long sleeveless flowing green gown while Fiebig wore an intriguing, rather odd, possibly futuristic in style black bolero top and a horizontally quilted grey long skirt rather unflattering and stiff. Handsome pianist Vincent Colagiuri was dapper in a tuxedo.

When we entered there was dappled purple lighting on the stage floor and sometimes the lighting was changed to be softened or stark and clear according to the particular work being performed .

To begin the program we had a very dramatic , powerful and intense performance of Richard Strauss’ ‘Allelerseelen’ with glorious playing from both flute and piano.

Then came the haunting, idyllic ‘Morgen’ which had a delicate, pastoral feel.  This was contrasted with the darker, passionate ‘ Zueignung ‘, both also by Strauss.

Rutter told a funny anecdote from her time in Spain and then delighted us with an exotic, rippling, shimmering Spanish work A Habanera by Ravel .
Rutter then told a delightful Jesse Norman story and we heard the passionate, liquid, floating La Flute Enchante based on  Scheherazade. Taryn Fiebig was in marvelous voice. It was a rich ,languid, hazy performance like floating on chocolate.

Five short pieces for flute ( Breves) by Mouquet were next . Rich and liquid, dreamy and darting, they dazzled with their haunting ripples of music.

The second half of the concert was filled by a fabulous world premiere of a particular version of Canteloube’s Songs of the Auverne, especially arranged for flute, piano , cello and voice. Rutter was extremely busy on flute and other instruments (eg piccolo) and Fiebig was in glorious rich voice and terrific on the cello.

This was superb , beginning with the haunting lyrical and lushly romantic Bailero that ravishes the senses  (dance followers might remember it as being used by Graeme Murphy as the Bedroom pas de deux in his land mark Some Rooms.And he has choreographed Scheherazade as well).

About ten other Songs of the Auverne were included with Rutter or Fiebig giving a tongue in cheek short English translation beforehand. They ranged from bright, exuberant and dancelike, to sad laments of lost love, floating and passionate, then contrasting with shattering ,spiky and fractured. In the third song (Ound Ouren Gorda) you could hear the bees humming lazily in the background.

For their encore, the Company performed another Song of the Auverne ( ‘Obal dins lou limouzi ‘). This was again presented vibrantly with stirring rhythms.

More rapturous applause however the concert had concluded and we had to go on our way, – to either buy the one of the CDs available or to find some lunch.

LIVE AT LUNCH: STRAUSS, RAVEL, CANTELOUBE   starring Jane Rutter, Taryn Fiebig and Vincent Colagiuri played for one performance only at the Concourse Chatswood on Thursday 16 October.