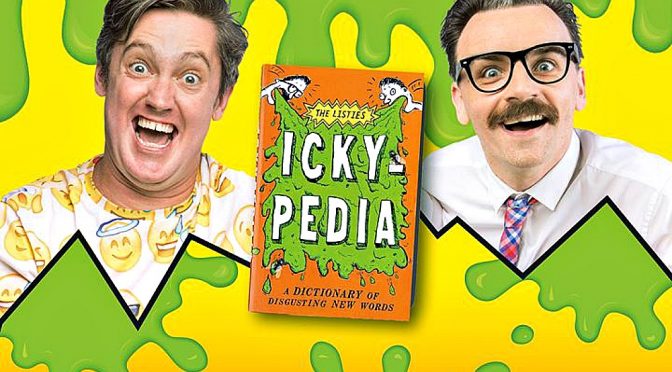 As an adult chaperoning a small human to a kid’s comedy show, you don’t have high hopes of enjoying yourself. At best, you can hope to receive some second-hand joy watching the ecstatic faces of the children you brought—knowing you have just become their coolest guardian. Alternatively, you can hope the show will encourage you to peg huge boogers at its presenters—which is precisely how THE LISTIES ‘ICKYPEDIA’ had me spending my Friday night; and yes, I thoroughly enjoyed it.

In THE LISTIES ‘ICKYPEDIA’, Richard Higgins and Matthew Kelly (both former adult comedians- turned children) bring their eponymous comedy book to the stage—an unfactual encyclopedia of hilarious, entirely made-up (and almost-always-poo-related) compound words. From being ‘fartled’ to accidentally entering ‘nose-go zone’, these new words and their expertly formed definitions finally address some of the Macquarie Dictionary’s shortcomings.

Let’s face it- we’ve all fartled ourselves before; thankfully, Rich and Matt are working to ensure the children of today grow up with a vocabulary that allows them to fully articulate the intricate nuances of their bowels. Thus, the show is up every kid’s alley- even the big, adult-looking ones. Like the book, the show is ridiculously chaotic and random; Matt and Rich illustrate their silly ‘werds’ with handmade props that look like they’ve been pulled directly out of an Andy Griffiths book and then glued together by a 3-year-old. Clad with self-naming T-shirts, fully-automatic toilet paper guns and several hundred plush boogers—the pair ensure there is never dull moment in the show.

They get some cheap laughs from the kids and adults alike but—despite their extensive oeuvre of fart jokes—they are clearly two very eloquent, witty guys. The duo has the impressive ability to make young kids, old kids and adults laugh at the same string of words– and all for different reasons. The entire show was very meta, with self-referential jokes and puns aplenty. The toilet humour is incessant and, to my shame, I think I laughed at all of it. For those adults who didn’t laugh at the poo (i.e. none of them), the subtle innuendo, sneaky Easter Eggs and stabs at Donald Trump did the job.

They were hugely interactive and responded impressively well to the kids’ participation (I’m pretty sure they tactfully backed out of a segment which was to be based off the kids’ suggestions, when no one seemed capable of producing anything beyond the word “poo!”). Overall though, their audience interaction definitely made the show (I thought my little brother might genuinely explode with excitement when Rich came running through our aisle). Their impromptu reactions were as hilarious as their prepared skits and neither one missed a beat or a booger (Matt literally caught every plush booger that was thrown at him by some conniving kids at the end of the show, not once breaking his dialogue other than to point out: “this is not my first rodeo, kids”).

The entire show culminates in a messy sketch that every child in the room can relate to, leaving the stage and its occupants in toilet paper and tatters. In Matt’s plight to attain the password to his iPad (which Rich has locked until his room is cleaned), a seriously epic battle breaks out between the audience, a gigantic inflatable snot-monster and the presenters. The show concludes with one of the most pertinent life lessons of contemporary children’s theatre: If you don’t clean your room, eventually, someone else will.

The show has gained critical acclaim across the country and won a plethora of awards. My primary disappointment was that I didn’t bring my friends with me to see it; I’ll certainly be going back next time their show hits Sydney.

The duo is based in Melbourne and sadly only stopped in for two Sydney shows at the Merringong Theatre. Until their return, they have several award-winning books and CDs available around Australia; their newest book, ‘Ickyfoodia’, has just hit the shelves.