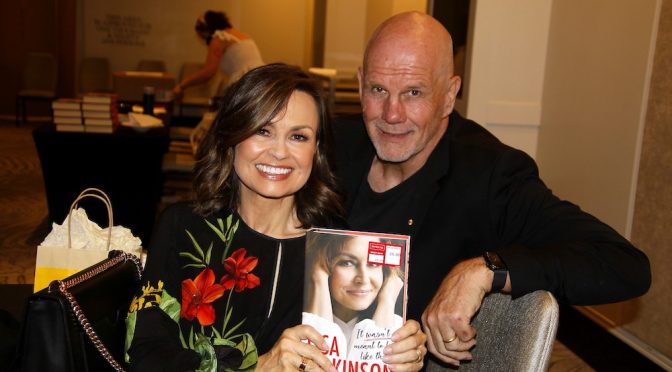 When Lisa Wilkinson spoke at the Dymocks Literary Lunch, the luncheon attracted a very different demographic from the usual silver haired women with the occasional silver haired man.

The new demographic ranged from a three month old baby girl to the silver haired set and consisted of a large proportion of young women who obviously see Lisa Wilkinson as a role model.

Another unusual aspect of the luncheon was that she received at the conclusion of her address, a standing ovation.

During her address she remarked on the bravery of such women as Grace Tame and Brittany Higgins and revealed that she too had been a victim of assault in her teens.

She paid tribute to her husband Peter FitzSimons who would drop everything to address her queries about her book, despite the fact that he too was also writing a book. She also thanked her three children for their patience with a mother who was trying to complete a 186,000 word memoir with a looming deadline in sight.

The young women in the audience were particularly interested in her meteoric rise of her career in journalism.

She was elected Editor In Chief of Dolly magazine at the age of 21. Lisa stated that when she applied for the job she had 40% of confidence  but she found a boss that had the additional 60% of confidence in her and under that regime she flourished.

However she urged a note of caution stating that a journalist or any young woman starting out should do their homework.

She confided in the audience that when she applied for the Dolly job, she had 7 years of the magazine stowed under her bed.

With the success of ‘Dolly’ she was appointed to the editorship of Cleo magazine, succeeding Ita Buttrose who she praised as a great mentor.

Another young woman asked how she transitioned from an ordinary Campbelltown childhood to the media celebrity she has become today.

She stated emphatically that she had never stopped from being that Campbelltown girl and it assisted her in being able to relate to Prime Minister’s as well as the common man.

She was asked who was her favourite interview. She stated that she had two. Firstly. the Pakistani heroine Malala Yousafzai who  despite being shot in the face and gruelling reconstructive surgery went on to become the youngest Noble Peace Prize Laureate for her advocacy for female education.

Lisa’s other favourite interview was Elton John who gave her fifteen minutes of his time in what was a highly entertaining and satisfying interview.

She was angry about the way in which women are bullied. She gave the example of Lindy Chamberlain and Monica Lewinsky who received a gigantic number of slanderous social media comments whereas the men such as Michael Chamberlain and Bill Clinton get off with a ‘light slap’.

Her extensive television career was barely touched upon as the audience seemed to want to focus on successful  career management.

Her memoir ‘It Wasn’t Meant To Be Like This’ appears to sound like a cry of disappointment. In fact, she stated that it was a title which meant to state how grateful she was ie she cannot believe the good luck she has had. She further stated that when she stumbled publicly due to the unrelenting media glare, it was a long and visible fall.

However her family would ‘catch’ her and her husband and three children meant everything to her.

In fact, they were in the audience to support her yet again.