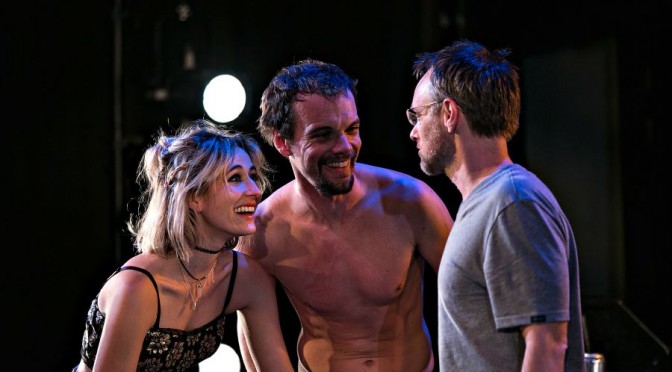 American playwright Lisa D’Amour has described her play as being about ‘the opening up of the private self to the public self’.

This is  a good ‘way in’ to appreciating this difficult, dense work if you decide to see DETROIT. The play’s biggest moments are when the characters unmask themselves from their public persona and reveal what is truly going on for them.

Two couples, Ben and Mary, and Sharon and Kenny, are living the American dream, setting up themselves in the new suburbia in downtown Detroit. The time period- circa the the nineteen sixties- signposted with the prevalence of Motown music in the soundscape.

Ben and Mary are the older, early middle-age couple, conservative, battling to make ends meet whilst Kenny and Sharon come across as brash, outspoken and irresponsible. The younger couple let on that they have been substance abusers who have recently come out of rehab…

DETROIT is an engaging  two hours in the theatre and has a good mix of some very dark moments with plenty of wryly comic moments.

The performances are in the main excellent, inhabiting their distinctive characters well- Ed Wightman as  the nervy, not very competent Ben, Lisa Chappell as his unhappy, picky wife, Mary, Claire Lovering as the provocateur Sharon, and James O’Connell as her creepy  husband, Kenny.

I wasn’t comfortable with Ronald Falk’s brief performance as the ‘fly-in’ character Frank towards the play’s end in an important role. The scene felt jarring and poorly directed by  Ross McGregor whose work was generally satisfying.

On a technical level this production is very demanding and the creative team do great work.

DETROIT is playing at the Eternity Playhouse Theatre until Sunday 16th August. Performance times Tuesdays to Saturdays at 8pm, Sundays at 5pm, Wednesday matinee 12th August at 11am, Saturday matinee on 1, 8 and 15 August at 3pm. More details:- http://www.darlinghursttheatre.com/