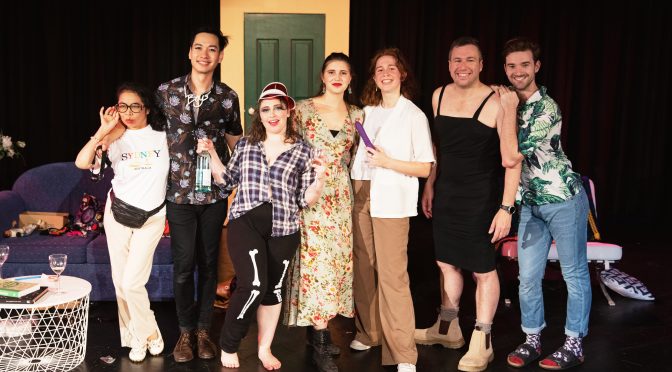 When I was the same age as several of the cast of the Lipstick show, I saw the first version of Matt Rowley’s Boys in the Band (1970 – not the 2020 Netflix remount). For a fairly sheltered young adult knowing little of gay culture I found the work, with its depiction of a birthday party in NYC attended by a coterie of men, surprisingly engaging. This was as much to do with its artfulness as its subject matter. Indeed the artfulness proved a persuasive means of enabling a quite confronting story of a NY subculture to achieve a certain popularity in cinemas and in America generally, and iconic status ever since. Arguably the film had as much effect on public consciousness as a political campaign, although not enough of course to prevent Reagan’s manipulation of the catastrophe of AIDS in America a decade later.

Diverse character types (there is only one camp personality in a room of eight men), a constant beat of sharply crafted and above all witty dialogue, surprising plot development in what seems a static one room claustrophobic situation (surprises that on several occasions come with an opening door), some real empathy along with abrasive mockery between characters, with a ambient set and music: as a soon to be theatrical writer the show for me worked a trick.

I make this reference by way of contrast to Lipstick. Here, five decades on from the achievement that was Boys the in Band, the two works might seem to have resemblances but they equally have marked differences. Lipstick has slapstick humour but lacks wit; it has raucous, circus like exchanges but not crafted dialogue; it has many personas but few characters; it has opening doors but far too many without justification in terms of dramatic or farce style.

This is the main problem I had with the show, one to do with the script, and that was categorising its genre, something that a reviewer should always do, in terms of assessing a work in its own terms, of what it aspires to do. No point regretting Samuel Beckett did not write musicals.

If Lipstick’s aim is to provide an elaborate and long sketch or revue, with lots on in-jokes about sex toys, condoms, flirting and hookups for a captive Queer audience, one assumes it serves its purposes. It probably also does not need a review, because it is culturally privileged – it is a private or at least sub-culturally specific work. But if the work is presented in main street, to a paying audience, as a theatre work alongside other theatre works, then it invites review and feedback.

As the introduction above indicates, the issue is not at all the sexual or gender or lifestyles preferences of the show – it is how they are depicted. If the aim was a gay version of Friends, that is a reasonable trajectory and there might be a place for such a work, but Lipstick has a long way to go in terms of depicting empathy, realistic situations and everyday humour. Is the show a French farce or English mid twentieth century living room sexual comedy (Not Now Darling), with opening and closing doors, hiding behind closets and lounges, then fine, but the work still needs wit and craft in dialogue and more diversity in characters. The ending had a happy denouement of relationships restored and made, but these are a long way off Oscar Wilde or Shakespearian comedies. If, as the director says, the show is meant to show real domestic situations and relationships, well what can be said. For sure the depiction of gay men is stereotyped: if this can be said about Rowley’s 1970 work, hasn’t there meant to be progress since then?

Phoebe Atkinson does a busy skilled job as Ana, the main female in whose home the action takes place. This was a demanding and long role, which she carries out with energy and poise. It helps that Ana is one of the better roles, and a real character. Gia Cohen is assured and quite up to the role of her online date – her arrival through an opening door is entirely appropriate and well played. Max Belmonte plays the role of landlord and father with restraint and humour, and Jordano Wegman plays the laboured part of the mislaid bride with relentless glee. Kevin T.S. Vun and Rowan Brunt are young actors showing great promise and deft precision in their style: in the show they seem constrained rather than released by the uber camp types they play. Kevin’s character seems quite obnoxious in constantly interrupting others’ privacy and the potential for tenderness or true emotion. This was not at all the fault of the actor – the buck stops with the very conception of the part he plays. Jamie Burchett constructed an adequate and functional set that well fulfils requirements of the show and the Chippen Theatre for quick turnabout of sets.

Finally, Laura Heuston directs what is a hectic and long (for one act) show with aplomb. There was a lot of work put in rehearsals, especially at the end of Covid, and the cast bring a dedicated comic verve which the audience rewarded in applause.

My criticism is not in the production, but in a script that is full of stereotypes, contrivances, constant sexual games and references, and overplayed action, If these devices were a little slower and aided by crafted dialogue, then the farce genre might have worked. For many of the audience it obviously did, but it was easy to feel a bit of an outsider.