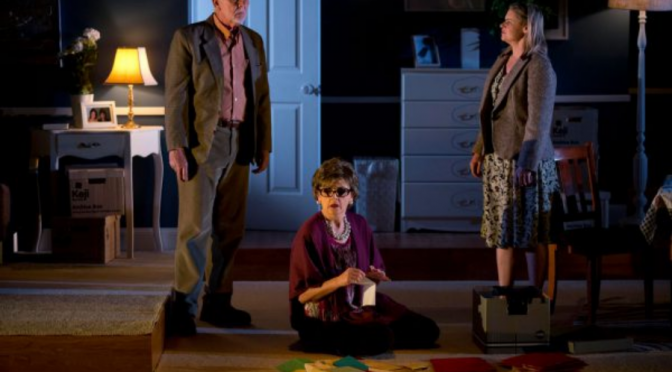 The vitriol hits you full on.  We knew it was there, it had to have been. While words like ‘murder’ impact hard, there is other sneaky vocabulary in there, ‘wilderness’ slides by in the middle of a sentence.  And should you see yourself in this opening assault, then you are in for a good old fashioned kick in the pants.  Despite the onslaught of thousands of LETTERS TO LINDY which threaten and accuse with a malignancy that only the anonymous can be truly capable of,  Lindy speaks directly to us with warmth and candour.  For this is a play drawn from a life, not just the 199 boxes of letters which are housed in the National Library, but interviews between Lindy Chamberlain-Creighton and playwright Alana Valentine.

In 1980 Lindy and Michael Chamberlain’s daughter, Azaria, was taken by a dingo from their campsite near Ayres Rock, as it was called then.  For reasons that defy understanding Lindy Chamberlain became the focus of public attention.  It was some kind of national sport to discuss the event, the succeeding inquests, the trial, around backyard barbeques.  We didn’t have water coolers then but I can remember the first joke hit well before the first headline did.  There was an ownership in the Australian psyche and many took to pen and paper to give their opinion.  Lindy kept the letters, she still does, letters and emails and gifts all donated to scholarship.

In an interview I was lucky enough to have with the playwright, Alana Valentine discussed passionately the careful curation of these letters by Lindy Chamberlain-Creighton.  That each “letter has its own manila folder and on the right hand side of each is a note that summarises what’s in the letter.”    Valentine says that only 3-5% are abusive and two-thirds are apologies.

After the initial onslaught of the abusive ones, LETTERS TO LINDY has a settled, linear timeline which allows the audience to see events through Lindy’s eyes.  Set the night she sends off the first boxes of letters to be archived, there is a chorus of two men and one woman to interpret the letters and Lindy speaks directly to us to comment and describe what actually happened.  Actually happened! For this is not a recognizable story, this is not our story and bloody hell who is this energy plus woman who bounces onto stage with a ready laugh and a twinkle in the eye?  You can’t bullshit us, we know Lindy Chamberlain and this is not her.

Valentine’s writing and Darren Yap’s direction collides full force with our preconceptions and then Jeanette Cronin’s dazzling performance drives reality through our careering memories of the time.  When Cronin first arrives on stage she is a disorienting open book, surely this is not Lindy.  Damn if it doesn’t sound like her though.  As the play continues and we hear about Lindy, the character begins to make sense and flesh and blood and frailty and strength develop from the myth.

Lindy is a mystery.  Why isn’t she sadly melancholy or violently disenchanted? Instead Cronin et al gives her a manifest incredulity at the injustice.  She will break during the show, she does.  And when that happens, Cronin vibrates with the pathos and poignancy of that passion at the same time as imbuing the words with the timbre and stridency that we remember in Lindy’s spoken voice.  Spontaneous applause.  You don’t notice but this is technical brilliance from Cronin, her use of eyeline, her inclusive sweeps over the audience and her gradual elision into an empathetic and knowable person are precise, emotionally powerful and unmistakably truthful.  It’s a wonderful performance and she has three terrifically created allies in the construction.

The three other characters (Glenn Hazeldine, Phillip Hinton, Jane Phegan) are separate from Cronin and she seldom interacts but in the small moments when she does, it can be a heartstopping shock of recognition.  On occasion, these three will create a wall of memory in the group voice and spoken poetic sequences that provide variety and appeal to our desire for a theatricality that Lindy avoids.  Plus some of their work in taking on the characters behind the letters is wonderful. From youthful to doddery, from hoedown song of domestic disaster complete with kick line to the intimate and protectionist, they miss no mark.  There is wracking emotion from them and rationality and loon craziness.  And a special word for the performance of Hazeldine in his embodiment of youngest son Reagan, it is heartbreaking and human and terribly, terribly brave on the part of the real-life boy, now a man, to allow it to be used.

LETTERS TO LINDY is on National Tour and one would expect a touring set but James Browne’s production design gives a solidity to the production.  Yet, in keeping with the themes of the text, the neat little cottage is designed so we can see into the guts of the thing.  What these characters do inside and behind is a metaphor not lost.  Nor is the sand beige and rock red in the costumes of the readers.  Lindy though, is costumed to draw the breath.  The wigs and the reproduction of her dresses really brings back how influenced we were by those constantly reproduced images.  Fold a long white, spaghetti strapped dress into a prison bag and you have a pin sharp reminder that this is a real story, perceived then and remembered now, through visuals. There’s a reason why Woman’s Day comes up several times in the text.

The lighting works well to provide mood and isolate or emphasise characters and emotions with some clever detail in the evocation of trees and time passing. (Designer:Jasmine Rizk based on the original design by Toby Knyvett)   The audio track, too, is subtle and hardly there in places.  (Design and Composition: Max Lambert and Roger Lock) No preshow or interval music, just an occasional underscore, like the light piano under Azaria’s birth, and an evocative sound effect… lazy crow above or hard mechanical behind… and the intermittent suddenness wrought by a violent letter.

And the gut punch of the music behind the ending of the play where this heroine, now much more understood than the confusing, perky, gregarious woman who reached out to us early, stands to bear witness and to help us heal.  This is a woman willing to share and respectful of how we were manipulated.  The gracious gratitude of the quiet believer is writ large.

There are no tiny bones on this stage, LETTERS TO LINDY does not provide that kind of answer.  Quite apart from its precision and impact as theatre making, this play serves as a cautionary tale about our justice system and an audience’s head shaking, teeth sucking, hearty laughter, tut-tutting engrossed viewing allows for a healing in the hive mind.  If you recognized yourself in the first 3 minutes of this show you may be a different you by the end.

LETTERS TO LINDY from Merrigong Theatre Company [Facebook] is on tour nationally and I saw the show at The Joan, Penrith [Facebook] .  The next stop for the show is Riverside Theatres, Parramatta.  You can read an interview with Alana Valentine here.