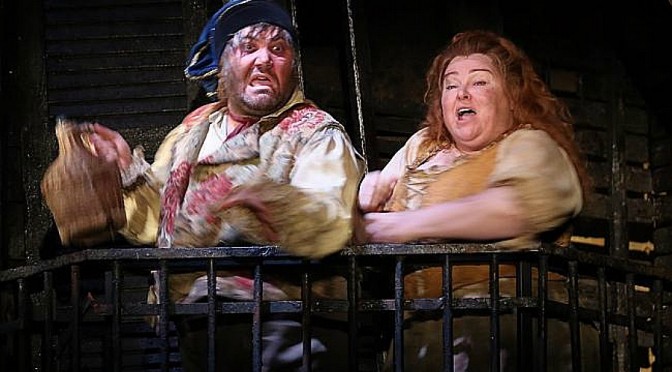 Visually stunning ,with some wizard special effects this is a tremendously thrilling production of one of the world’s most popular musicals.There is magnificent ensemble work and the leads are terrific.

We follow Hugo’s epic, sweeping tale of love, morals, suffering and redemption and a sharp criticism of the state of society at the time.

This production was first seen in London in 2010 .Here in Australia it has been seen in Melbourne and Perth and there are some changes to the ‘standard’ version for those of us who know the Trevor Nunn production well:- there are no dates and town names… the barricade is slightly different…coup de theatre with the two halves revolving and joining…snippets of dialogue are sometimes given to different characters- but overall it is the gripping , heartbreaking musical we know and love. There is sensational use of projections for Jean Val Jean’s disappearance and trudge through the sewers.

This production moves the story at a cracking pace and has very fluid, essentially cinematic scene changes using sliding trundles and screens and fly-ins, and the musical score has been slightly tinkered with to bring it up to date .A small quibble I have is that for almost all the songs (including Javert’s ‘Stars’ , Val Jean’s ‘ Bring Him Home’ and Eponine’s ‘ On My Own’ ) the sound level was too high.

Our Everyman suffering hero Jean Val Jean , 24601 , the reformed convict,was tremendously played by Simon Gleeson. A rock solid performance we follow his suffering and moral dilemmas and trying to be good. He is brilliant in his defiant ‘ Who Am I?’ and his passionate , pleading ‘Bring Him Home’ stops the show.

His cold, implacable nemesis, steely Javert, is given a towering performance by Hayden Tee who brings the house down with his troubled ‘Stars’ soliloquy aria and his whirling suicide. Their confrontation scenes are electric.

Our young romantic lead Marius is terrifically played by Euan Doidge who transforms from love-struck student on the fringes of rebellion to a loving husband..He is blind to poor Eponine’s love and thunderstruck by Cosette. His ‘Empty Chairs and Empty Tables’ is very moving.

Poor abused young Cosette was enchantingly played by Chloe de los Santos ( “ There is a Castle On A Cloud’ ) and grown up Cosette was delightfully played by Emily Langridge who revealed at times a quite operatic voice. Eponine ( Kerrie Anne Greenland) stole our hearts with her ‘ Only On My Own’ which brought the house down and we wept at ‘A Little Fall of Rain’ .

Young handsome rebellious leader Enroljas is thrillingly , hypnotically played by Chris Durling . Plucky Gavroche was excellently portrayed by Nicholas Craddock .Fantine was angelically played by Patrice Tipoki in a fine, strong performance, stopping the show with her’ I Dreamed A Dream’ .She was very pretty in a lovely blue dress and then white at the end . It is interesting to note that for ‘I Dreamed A Dream’ her hair is already cascading down , unlike the Nunn version .

There was great comic timing at certain points, especially for example with the Thernardier’s ‘Master of The House’ ( in reality very tightly choreographed and polished)and their cynical ‘Beggars at the Feast’ . While they were brilliantly performed I found the Thernardiers ( Trevor Ashley and Lara Mulcahy) played as panto villains , played for laughs and extremely vulgar and uncouth . ( And that dress Madame wears in ‘Beggar’s Feast! ‘ ) But the rest of the audience seemed to love them .

A stirring , thrilling version that will have you scrambling to join the barricades. Do you hear the people sing?!