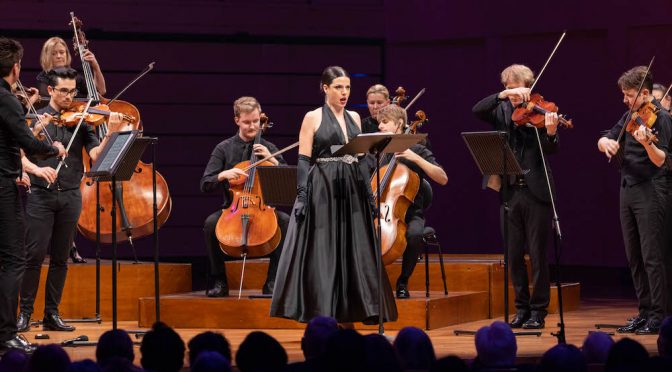 The latest captivating concert by Camerata was filmed at QPAC and streamed by the ADCH . with the umbrella title ILLUMINATIONS. The playing was magnificent, assured and accomplished. Mention must be made of soloists Thomas Chawner on viola and Karol Kowalik on cello, and violinists Brendan Joyce and Jonny Ng. The concert blended the subtlety and sensitivity of French Impressionist poetry and music (Debussy) with English aplomb (the Britten and Elgar works).

The program began with Edward Elgar’s rich, multi-layered Serenade for Strings, Op.20 (1892). It opened briskly with scurrying swirls and eddies but then changed and rippled and swelled passionately in a slower, far more thoughtful way. The piece was dignified, polished and thoughtful. The wonderful ensemble was given various moments to shine.

Next came Claude Debussy’s String Quartet, Op.10 ( 1893) arranged as a Chamber Symphony by Gail Aitken, which was given a passionate,lyrical performance. It was off to a quivering, pulsating, scurrying start for the first movement with spiky flourishes.The second movement with insistent violins was faster, but far more of a dialogue between the ensemble that ebbed and flowed with the circular melody and note the use of pizzicato as it surged and pondered. The third movement with its aching violins was slower and more melancholic. The fourth, final movement was reflective and intense – but then there was a sudden, tumultuous whirling taken, repeated and developed,  leading to the bouncy, tumbling conclusion

Aitken then introduced Benjamin Britten’s  Les Illuminations Op.18 for soprano and string orchestra, (1940) with special guest soprano Sofia Troncoso. But first actor, Morgan Francis, impressively read a translation of the nine Rimbaud poems. Troncoso was sleek, elegant , fiery and intense in a striking black gown and elbow length gloves and she sang with great fervour, deeply engaged, showcasing her assured and graceful soprano. Camerata accompanied her with scintillating ensemble work. The mood varied from sharp, spiky and intense to shimmering, lyrical and wistful and also included fast staccato. Britten’s scoring was accomplished and astute and Tronscoso erupted into this prismatic, multi-layered song cycle – for example there is the  sardonic Parade and the tender, melancholic Depart at the end .

A most striking concert .

Filmed at   QPAC and streamed by the ADCH