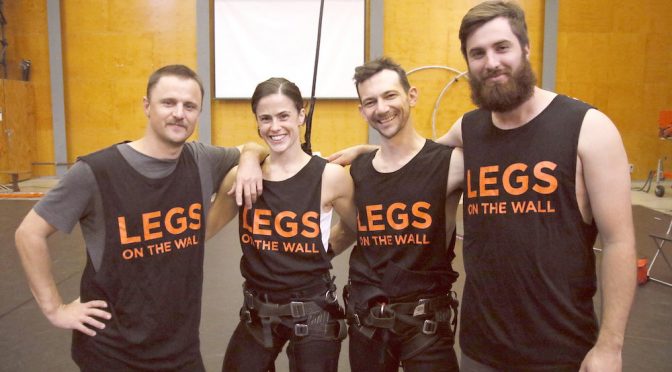 Due to a scheduling mix-up, I was privileged to be the only person to witness rehearsals for the show NEXT CHAPTERS : UPLIFTING ORCHESTRAL MANOEUVRES to be held at the Concert Hall, the Concourse, Chatswood next weekend, Saturday 22 May at 7pm  and Sunday 23 May at 2pm.

The aerial acrobatics, in themselves, are not something that we have not seen before in a circus seating. What IS unique and extraordinary in their upcoming performances is that they will be flying over the Willoughby Symphony Orchestra in a spectacular and powerful collaboration.

Artistic Director Joshua Thomson told me that Legs on The Wall have been performing since 1984.  They not only drew their membership from organisations such as Circus Oz and Flying Fruit Fly Circus but also from such places as NIDA and the ballet world.

The rehearsal took place in a remarkable space called the Red Box named after the colour of its exterior. Red Box is part of a complex known as Number 91 Canal Road due to its proximity to the Hawthorne Canal.

It was previously an army depot and at some stage was handed over to the creative arts and entertainment industry.

The  aerialists I was privileged to see were Jana Castillo and Todd Sutherland with David Jackson as the rigger controlling their heights above the ground.

I am sure that the intensity which the troupe put into the rehearsal  process will pay huge dividends during their season at Chatswood, their first since the lockdown in March last year.