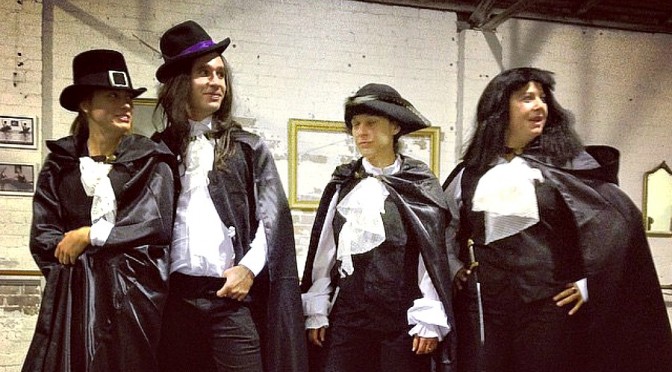 Audiences will probably be far more familiar with the opera that was inspired by this play, Verdi’s Rigoletto.  Written in 1832, Hugo’s play was criticised as immoral and encouraging vice.

Here in this production by Dram’in French, performed in French with English subtitles, and featuring minimal staging, we are presented with a gripping, powerful version featuring a magnificent Triboulet who rightly dominates the production. The play is very much of the Romantic era and has some possible parallels to Giselle, with a virginal young girl being deceived.The plot also includes politics, deception, disguise and abduction.

Under the direction of Jean-Yves Brignon the ensemble work was neatly handled (most playing several parts) and the story moved at a brisk pace.

As well as being the helmer Brignon also played the main character of Triboulet. He was superb. Bald, scarred and menacing he had a mesmerising, powerful and hypnotic presence. He played a doting , almost obsessively controlling father, fiercely protective of his precious, young, innocent daughter, Blanche. As court fool he became entangled in the various plots and counter plots that swirlws around the court and, given what happens to Blanche, he decides on regicide and revenge. However, it all goes terribly wrong. Brignon in his extended monologue where he examines his conscience and both sides of the plots and rails against his position is superb. He delivers a finely nuanced performance throughout.

Triboulet’s beautiful daughter Blanche, in a white dress, is portrayed as innocent and charming, a great contrast to the hardened, world weary, sophisticated court ladies around her . Her balcony scene dreaming over the King, in his disguise as poor student, was quite Juliet.  An exquisite performance by Lou-Ann Aubin.

The King, Francis 1, played by Harley Le Burgh, is portrayed as young, handsome, sometimes childlike and petulant (the foot stamping!) and accustomed to getting whatever he wants. He is used to leading a luxurious playboy life and thinks only of himself.

The conspirators, ,abduction and court scenes were very effective. Costumes were representative of the eighteenth century. There was minimal scenery. Something that I did find disconcerting was the strange soundtrack that seemed far too contemporary.

This was a striking version of a rarely seen play.