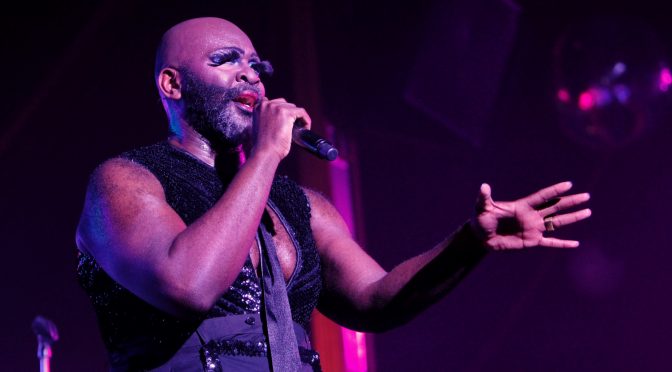 From his dramatic entry from the rear of the Magic Mirror Spiegeltent to his closing with a singalong version of Whitney Houston’s HOW WILL I KNOW, Le Chateau Chocolat comes up  with a fantastic show. Admittedly, in the singalong he didn’t think the Sydney audience was up to reaching the high notes so he said that he would take it from there. This and similar asides during the concert were performed with charm and humour.

He performs a variety of songs from his musical heroes and links them with stories about his life. Madonna is his number one icon but he also plays loving tributes to various disco artists, David Bowie, Meatloaf, Pavarotti and a few fairly eclectic performers. His interpretations are heartfelt, innovative and make full use of his wide ranging powerful voice.

Le Gateau Chocolat entertains us with his soundtrack from when he completed the London marathon. When the audience laughs at his finishing time he takes them to task, explaining what a herculean task it was and the similarities he now has with Usain Bolt!

I thought one of the most moving parts of the show was when some sound bytes were played about the woeful plight of refugees, immigrants and world politics. He then went on to perform a passionate rendition of the Afro-American spiritual LORD, HOW COME ME HERE, drawing a clear correlation between the misery of the African slaves brought to America and modern refugees and migrants fleeing poverty and oppression.

Overall this is a joyous and fun show with a nice balance of the profound with the moving. Flamboyant costumes, a hairbrush microphone, hilarious use of fog machines, fans and songs like It Should Have Been Me and Xanadu are mixed with stories of depression, growing up gay in Nigeria and religion.

LE GATEAU CHOCOLAT : ICONS  is highly recommended. Part of the 2019 Sydney Festival, it is on at the Magic Mirrors Spiegeltent until 27th January, 2019.